Ukraine military base near Poland hit, 35 dead : The Tribune India 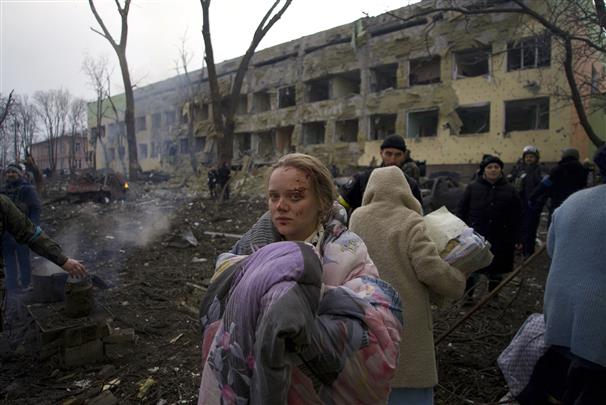 People outside a building damaged in Russian shelling at Mariupol in Ukraine. AP/PTI

A Russian missile attack on a large Ukrainian military facility near the border with NATO member Poland on Sunday killed nearly 35 people and wounded 134, a Ukrainian official said.

Britain said the incident, just 15 miles (25 km) from the Polish border, marked a “significant escalation” of the conflict. US President Joe Biden has said the North Atlantic Treaty Organisation (NATO) will defend every inch of its territory if Russia’s invasion of Ukraine spills over into member states of the Western defence alliance.

Ukraine said foreign military instructors have previously worked at the Yavoriv International Centre for Peacekeeping and Security, but a NATO official said there were no personnel from the alliance there. Regional governor Maksym Kozytskyy said Russian planes fired around 30 rockets at the facility, adding that some were intercepted before they hit. The 360 square-km (140 square-mile) facility is one Ukraine’s biggest and the largest in the western part of the country.

Our convoy with humanitarian aid is two hours away from Mariupol. We’re doing everything to counter occupiers who are even blocking orthodox priests accompanying this aid, food, water and medicine.

The Kremlin did not immediately reply to a request for comment on the reported missile strike so close to the border with NATO. “Russia has attacked the International Center for Peacekeeping & Security near Lviv. Foreign instructors work here. Information about the victims is being clarified,” Ukrainian Defence Minister Oleksii Reznikov said in an online post. Russia’s invasion of Ukraine, launched on February 24, has sent more than 2.5 millions fleeing across borders and trapped thousands of people in besieged cities.

The United States said it would rush up to $200 million in additional small arms, anti-tank and anti-aircraft weapons to Ukraine, where officials have pleaded for more military aid.

US, China officials to meet

President Joe Biden is sending his national security adviser Jake Sullivan for talks with a senior Chinese official in Rome on Monday as concerns grow that China is amplifying Russian disinformation in the Ukraine war and may help Russia evade punishment from economic sanctions. — Reuters/AP

2.5 million people are estimated to have fled from war zones in Ukraine