Video: Motorcyclist falls in front of speeding truck. You won't believe what happened next 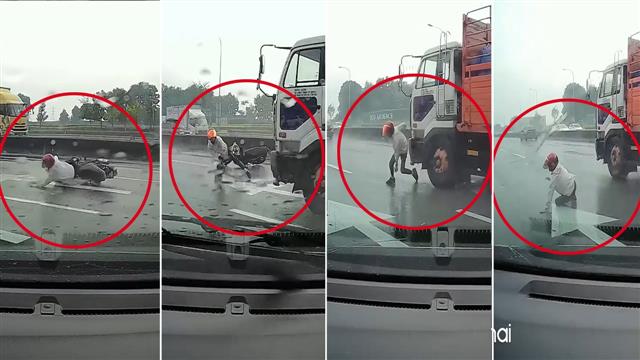 A hair-raising video from Malaysia showing a motorcyclist latterly run over by a truck after crashing on a busy road has gone viral. The incident is said to have reported on January 24.

The dashcam footage was shared by an onlooker who was sitting in his automobile and noticed the accident. The accident occurred while it was raining. In the clip, the biker probably lost control of the bike as the road was slippery and fell just in front of a speeding truck. As soon as he saw the truck rushing towards him, he left the bike and in a nick of time he ran towards the other side of the road.

The truck driver ultimately hit the brakes and stopped, whereas the motorcyclist slipped away unharmed. The footage has gone viral on Facebook, posted by ViralHog, racking up lakhs of views.

“Thank heaven he was in a position to transfer out of the way in which that quick. God was serving to him huge time,” wrote one Facebook user.

“Very fortunate the truck did not get him. Sorry he skidded,” one other wrote.