It was bound to happen eventually considering the amount of time I spend in the wilderness, says one hikers 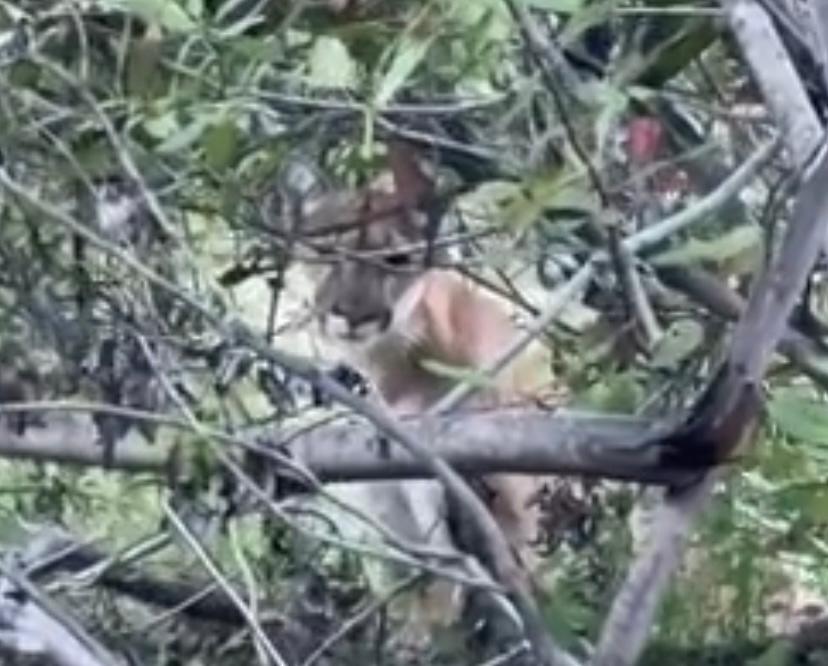 A still from video posted on Instagram by Mark Girardeau.

It was sure a lifetime experience for these two hikers who came face-to-face with a mountain lion at Whiting Ranch Wilderness Park in southern California.

Mark Girardeau, a wildlife photographer, and Rachel de Vlugt were returning from a hiking track and came face-to-face with the mountain lion.

However, they managed to take videos of the two-minute unnerving encounter.

A video shared by Girardeau on Instagram on November 6, the mountain lion can be seen hiding in bushes and staring at the two hikers from a distance of about 5-10 feet.

Girardeau can be heard, “There is a mountain lion over here.” Then he shouts, “Ger back, mountain lion!.” When the animal refuses to budge, Girardeau shouted loudly, “Get back!”

He shouts many times and then asks his co-hiker Vlug, to “just chill,” to which she says, “No!.”

Then Girardeau can be heard saying, “it’ll back away slowly..just don’t turn around.”

When they turn to walk, the mountain lion moves and follows them in the same direction at a distance. Girardeau asks his co-hiker to hold on and not to turn their back to it. “This episode lasted for two minutes before the lion backed off,” says Girardeau in his Instagram post’s caption.

According to the photographer, “It was bound to happen eventually considering the amount of time I spend in the wilderness. @locorachel and I were hiking out after checking trail cams and all of a sudden saw something brown running up the hill towards us, by the time we stopped and looked, this cat was already 5-10 feet from us as it stopped and stared at us. Realizing we were in a stare down, I started filming, this encounter lasted 2 minutes before the cat backed down. This mountain lion is a female known as Uno. I think there are 2 things that could have caused this: either she has a kill nearby and she was defending it or she ran up at his not realizing we were humans since she couldn’t completely see us from down below. There were deer in the area that we saw so she probably assumed it was them. Mountain lions do not seek humans out to feed on and this is why it’s good to hold your ground because any prey item for mountain lions runs away. Attacks on humans are extremely rare and you’re more likely to win the lotto or get struck by lightning. Obviously the mountain lion doesn’t understand what I’m saying but the point here is to keep announcing yourself and assert dominance over the situation. This is the mountain lions home, we are simply visitors in it. For the safety of the cat, this exact location will not be given.”