World experiencing one of the deepest recessions since Great Depression: World Bank 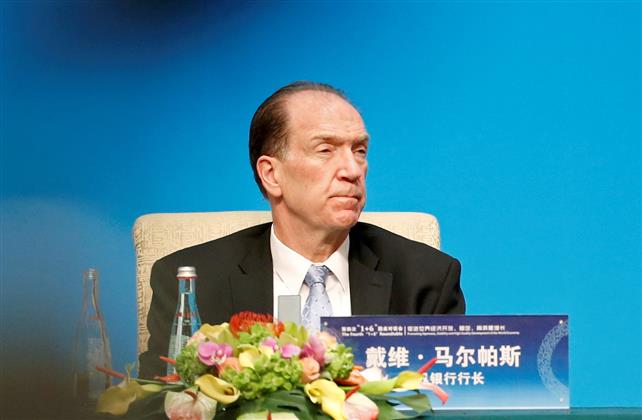 The world is experiencing one of the deepest recessions since the Great Depression in the 1930s owing to the novel coronavirus, World Bank President David Malpass has said, terming the COVID-19 pandemic a “catastrophic event” for many developing and the poorest countries.

He told reporters that given the extent of the economic contraction, there was a rising risk of disruptive debt crises in countries.

So that has got a lot of focus here at the meetings, Malpass told the media on Wednesday at the start of the annual meetings of the International Monetary Fund and the World Bank.

“The recession has been deep, one of the deepest since the Great Depression. And for many developing countries, and for the people in the poorest countries, it is truly a depression, a catastrophic event. It is continuing to add to the ranks of those in extreme poverty,” he said.

That is the focus of this meeting and the focus of their actions, he said, adding that the World Bank was building as big a growth programme for countries as they can in this fiscal year.

A day earlier, the Board approved the extension of the health emergency programmes to up to USD 12 billion for vaccines and therapeutics and distribution of those in countries that do not otherwise have access.

Responding to a question, Malpass said that the world was currently experiencing a K-shaped recovery.

That means that the advanced economies have been able to provide support, especially for their financial markets and for people that have jobs that can be done by working from home. But people that are in the informal economy have lost their jobs, and are depending on social protection programmes, he said.

“What we’re trying to do at the World Bank is recognise that problem and provide extra support for social protection for the poorest in countries, also recognising the agricultural challenges,” he said.

The president welcome countries that are keeping open their export markets, and also countries that are able to change their subsidy systems in order to allow more food availability within their economies during this very challenging time.

Malpass said that the first priority was saving lives, people’s health, and safety.

That involves procedures that have been widely discussed of social distancing and masks and proper health care if people contract the virus, strengthening of hospital systems and so on. All of those are important, he asserted.

“And then, as we look at the next stage, what I think we can be talking about is that it’s going to be a prolonged downturn for many of the countries, there won’t be as fast a rebound in tourism, for example, as many would like to have,” he said.

There will need to be flexibility in economies, so that people can move to new jobs and positions, and the country can be prepared for a post COVID-19 global economy, Malpass said.

Acknowledging that it is going to be different from the pre-COVID-19 economy, he noted that one does not know exactly how and that will only evolve over time.

“And so, having countries preserve some of their core industries and businesses, and then keeping families together. We’re providing social safety nets to try to help provide cash grants for people, for example, in Brazil, we have a sizable programme. In Jordan, we support Jordan’s sizable programme and elsewhere around the world,” he said.

The World Bank is encouraging countries to spend in the first instance on health programmes, on social programmes, and on education, Malpass said, adding that a critical step for countries is to reopen schools.

“We think there are as many as a billion children still out of school in the developing world. And in those cases, learning goes backward, which has a huge future cost for countries. This is particularly true for girls that are left out at a critical point in their lives, left out of school. That’s a high priority,” he said.

Now, looking longer term, infrastructure is a very important part of a country’s growth, he said.

“We have a large undertaking through the IFC that works on infrastructure that helps provide electricity and low carbon ways, for example, that helps provide clean water, that helps provide global public goods, meaning helping the country reach a balance with the environment and with the climate that benefits themselves and their neighbours. All of those are key priorities,” he said.

On infrastructure, one of the challenges is they have a very low interest rate environment, and it should be an environment that provides much more infrastructure investment than is currently occurring, Malpass said.

“A key step in this is the documentation and the standardisation of the quality of the infrastructure projects. It’s vital that the world move toward a financing structure where multiple infrastructure projects can be pooled in order to reduce the risk to the entire package, and that’s difficult right now because of the difference in the contracts.

“So, one of the things we’ve wanted to do is try to help standardise some of the contracting and make it much more transparent. This will help the infrastructure build up,” he said. PTI