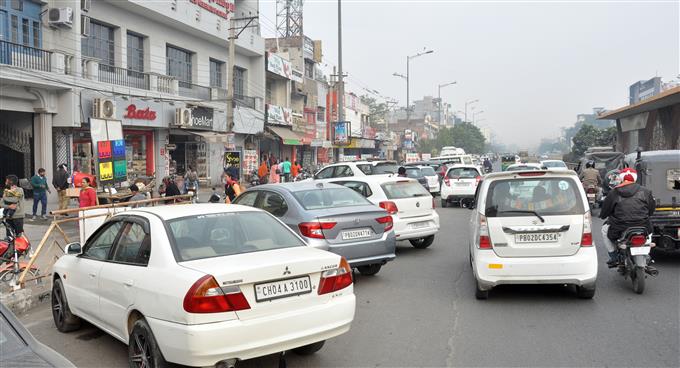 Vehicles parked in a disorganised manner on roadsides in Amritsar on Friday. Photo: Sunil Kumar

Setting up of a large number of commercial establishments without adequate parking facilities in the city is causing congestion on city roads. The vehicles parked outside these establishments have become bottlenecks for the smooth flow of traffic.

During the past two decades, a number of shopping malls, outlets, showrooms, etc, have come up on the main roads. A large number of these establishments do not have parking lots of their own. Those do have the space it is insufficient to accommodate adequate number of two wheelers and four wheelers. For instance, a massive store selling grocery items on the Lawrence road does not have space to park four wheelers. Yet a number of cars can be seen parked not only on the roads outside it but also on the adjoining roads. Similar, scene can be found outside a hospital on the GT road and the Mall road.

Similar situation can be seen on Mall Road, Lawrence Road, Batala Road, GT Road, Majitha Road. Vehicles can be seen parked on both sides of Queens’ Road, categorised as a prime commercial stretch, leading to traffic congestion. Adjoining, Mall road is another example of unauthorised parking of vehicles on its one side which has a number of commercial outlets. Mayor Karamjit Singh Rintu said he would direct the staff concerned address the issue.

Acted in about 200 movies in Telugu, Tamil, Kannada and Hind...