Ensure 100 per cent processing of garbage in Chandigarh 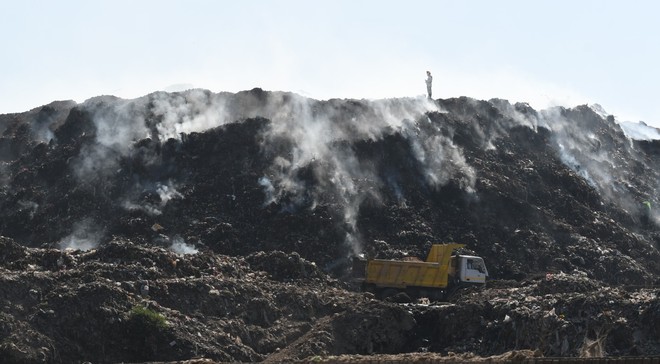 In case of a fire, smoke from the dumping ground inconveniences residents of nearby areas in Dadu Majra, Chandigarh. file

What steps should the MC take to prevent fire incidents at Dadu Majra dumping ground?

Keep vigil on dump through drones

Garbage is a hazard because it produces bio-gases on catching fire. The best way to prevent fire incidents at the Dadu Majra dumping ground is to keep a vigil through drones. The UT Administration should provide enough firefighting equipment at the dumping ground. The authorities can also use helicopters to spray water on fire at the dumping ground and extinguish it quickly. It will protect the environment and save lives of the people.

Mountains of waste at the Dadu Majra dumping ground give our City Beautiful a bad look and also spread nauseating smell, which resident are forced to inhale. Why waste garbage? Segregate dry and wet garbage at source. Dry waste should be collected separately and reused to make tiles, benches, and other items. Bio degradable waste should be used for making organic manure in rectangular bins set up in each sector. Aim should be to ensure that no waste is dumped at Dadu Majra. Rather it should be recycled and reused. City resident should follow the policy of reduce, reuse and recycle waste.

Barring some accidental fire incidents, the waste at the Dadu Majra dumping ground is ignited by sanitary workers, who find ways and means to reduce/avoid proper waste handling/disposal. Such incidents, which are common on roadsides, parks and gardens, irritate lungs of passersby and cause accidents as smoke reduces visibility. The solution lies in regular education and penalisation of the ‘evil-doer’ staff. That what burns never returns, but pollutes ground, air and water.

There is no denying the fact, that it’s the Municipal Corporation’s failure to get the waste treatment plant at Dadu Majra run to its full capacity to treat the city’s daily waste. This has piled up waste at the dumping ground. Untreated waste not only spreads foul smell, but also catches fire. Poisonous smoke billows from the waste on fire, which makes breathing difficult. Using lakhs of litres of water douse flames is an uphill task. The remedy, therefore, lies in reducing and recycling waste.

Prevention is key to managing landfill fires. This can be achieved by engineering the landfill site with fire suppression technology. It should focus on monitoring potential fire sources and have readily available tools to manage the blaze. Although the awareness of fires in waste facilities and their consequences has increased in recent years, significant safety challenges remain. Fires in waste can lead to large effects on the environment or severe health effects.

Firstly, the dumping site in Dadu Majra should be shifted to some place far away from human settlements. Already the dumping ground is a health hazard for residents of the area and repeated fire incidents add to their woes. For the time being, the Administration must not let garbage pile up at the dumping ground. Proper waste disposal is the need of the hour. Dry waste must be dumped in such a way that it does not catch fire easily. From time to time the dumping site should be levelled. The problem will aggravate in summer months due to excessive heat. So, timely arrangements to solve the issue are must to safeguard the lives as well as the environment.

Give processing to reliable contractor

Find and remove cause of spark

The massive fire at the dumping ground is nothing new because the authorities have failed to find a feasible solution for the problem. The thermax furnace and solid waste incinerator at the Dadu Majra dumping ground must be made functional at the earliest. It will ensure more processing of the toxic solid waste rather than dumping in the open. Methane gas produced from the dumped garbage is a catalyst for the fire. The cause of the spark must be found and removed to prevent massive fire at the dumping ground.

Cops can be deployed to check if any miscreant are involved in lighting waste at the dumping ground. A fire station can also be established nearby dumping ground to handle blaze as soon as possible. More trees can be planted around dumping ground so to check air pollution and lower the intensity of foul smell in the area. The last option is to either move dumping ground or nearby residential area to some other place.

The fire at the garbage dump in Dadu Majra is a cause of concern. People living around the dump are facing inconvenience and health issues due to fire incidents followed by dense smoke. The Administration must initiate immediate steps to prevent fire incidents at dumping ground. Garbage should be disposed of through incinerators. The dumping ground must be shifted to some other place away from residential area for residents’ safety.

Recurring fire incidents at the Dadu Majra dumping ground proves failure of the Chandigarh Administration. For long the Administration could not come on terms with companies, which managed garbage processing plant. How can the Administration manage piles of garbage at the dump? The most affected people are residents of Dadu Majra, Dhanas and adjoining villages of Punjab. As pandemic curse bothers the population the smoke of burning garbage lowers immunity of residents living near dumping ground. The UT Fire Department pours water on burning garbage instead of sand, which can extinguish the blaze sooner. The Administration must tie up with an expert company to oversee that minimum garbage is dumped at the Dadu Majra ground. Officials concerned must check that garbage is processed and disposed of regularly.

Get the plant repaired

Thermax furnace is out of order at the Dadu Majra dumping ground.

The Municipal Corporation should get the plant repaired on a war footing and make it run to fullest capacity so that non-recyclable and inert waste go to the dump site and the remaining is processed.

The Dadu Majra dumping ground has always been an eyesore for visitors and nearby residents. A better and higher capacity waste processing plant is required, but it seems the Municipal Corporation is not serious about resolving the issue of frequent fire at the dumping ground. The result is mountain of waste at the dumping ground. Bio-mining contract has been given, but the time frame is not clear.

Activists should take help of judiciary

The garbage dumping ground at Dadu Majra needs immediate attention of the Administration. The frequent fire at the dumping site is a serious health hazard to city residents. The smoke emanating from burning garbage has toxic elements, which can damage skin, eyes and lungs. Most vulnerable sections of the population such as children, sick and the elderly are more prone to harm by toxic air. Either the Dadu Majra dumping site should immediately be shifted out of Chandigarh or a state-of-the art solid waste management plant be set up. Social activists may also take help of the judiciary to deal with the issue.

It’s shocking to see yet another fire at Dadu Majra solid waste dumping site in Chandigarh causing lot of health issues for the people residing nearby. A similar fire occurred last year also. Landfill fires are usually caused deliberately or by spontaneous combustion of decomposing waste involving methane from landfill gas. Of particular health concern are the tyre fires, which burn for a long time. Burning tyre are known to emit dioxin and benzene derivatives, which have been linked with reproductive impairment and cancer in humans. Effective landfill management by the MC and operators is necessary to prevent the occurrence of harmful fires. It calls for constructing and operating well-engineered municipal solid waste landfills.

The byproducts of solid waste in a landfill have adverse effects on the surrounding environment and humans living closer to dumping sites. The greatest health risk from the open burning of garbage at a waste disposal ground is for those closest to the fire, who may inhale smoke. Other individuals on-site and off-site may also be affected. Population residing and working in the vicinity of solid waste processing plant are exposed to health risks due to emission of toxic gases and air pollutants. The health risk shows that proper landfill management is essential. Landfill should be located far away from residential houses and institutions to avoid health and environmental related risks.

Repeated fires at the garbage dumping ground are not only dangerous for human lives, but also affect all living creatures in the vicinity as well as polluting atmosphere. In the present digital era 24x7 vigil should be kept through electronic gadgets to prevent fires at the dumping ground. Further, sufficient arrangements should be made to extinguish fire in time when detected.

Not only residents of Dadu Majra, but those living in the vicinity too face breathing problems due to smoke emanating from burning garbage. Covid-19 has further aggravated their woes. Even after the fire is doused, residents remain sick. Thus, it becomes imperative to check such fire incidents at the dumping ground. The Municipal Corporation should take appropriate measures to prevent fire incidents. Various processes like solid waste incineration, which require high temperature, should be made available.

Keeping in view the rising number of Covid-19 cases in Chandigarh, should schools proceed with the offline examination or continue with the online mode.