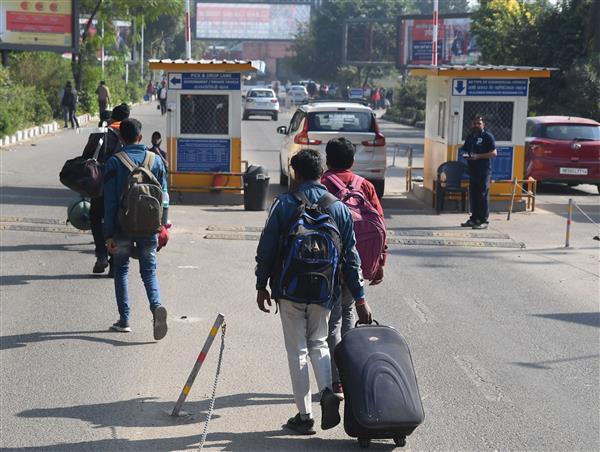 Owing to charges, passengers are dropped off by cab and auto drivers short of the parking booths, forcing them to walk up to the Chandigarh railway station with their belongings on Monday. NITIN MITTAL

The pick-up and drop-off system introduced recently at the Chandigarh Railway Station continues to burn a hole in the pocket of people.

Harassed passengers are often seen fighting at the parking lot over the six-minute free window to pick up or drop off passengers. Many passengers have to walk long distances to catch a train or a cab as cabbies are reluctant to enter the zone due to hefty charges for exceeding the six-minute window.

Sonia Malik, a city resident, laments: “People are being harassed due to the prevailing system. Those manning the parking counters are rude. How can a vehicle get out of the zone within six minutes if other cars are already lined up in front? I have had to walk outside with luggage as no cabbie is willing to enter the zone. It is only causing traffic jams.”

Raising a banner of revolt against the system, the city Youth Congress today started an indefinite protest. The activists staged a demonstration to press the Chandigarh and railway authorities to withdraw the charges. The protest, to be held from 12 pm to 5 pm every day, will continue till the demands are met.

“People are being fleeced in the name of fee. Cabbies, auto-rickshaw drivers, and rickshaw-pullers are also feeling the heat, as they cannot pay such high charges. The Railways is meant for mass travel. Earning profits by putting extra burden on people is uncalled for,” said Manoj Lubana, president, city Youth Congress.

HS Lucky, president of city Congress unit, said: “The decision would affect the interest of common people. The party will protest the decision. The government is trying to privatise the Railways. We want the fee withdrawn immediately.”

“The Railways, being government-owned, provides nationwide connectivity to the masses. Once privatised, it will become a profit-making enterprise and less popular routes will be discontinued. Its privatisation can have a negative impact on connectivity and will further increase the urban-rural divide,” said Lubana.

Under the system, Rs 50 is charged for a six to 15-minute stay in the chargeable zone and Rs 200 if the duration is between 15 and 30 minutes. Commercial vehicles have to pay Rs 30 for the first six minutes, while the rest of the charges are the same. — TNS

Those manning parking counters are rude. I had to walk outside with luggage as no cabbie was willing to enter the zone. It is only causing traffic jams. — Sonia Malik, a city resident

People are being fleeced in the name of fee. Cabbies, auto-rickshaw drivers, and rickshaw-pullers are feeling the heat, as they cannot pay high charges. — Manoj Lubana, president, city Youth Congress