Why has there been an upsurge of Covid-Associated Mucormycosis during the second wave? Various risk factors are contemplated. There was injudicious use of steroids in high doses and for a prolonged duration. The other factors may be prolonged use of contaminated masks without changing. There is a strong possibility of the use of a contaminated accessory during inhalation of oxygen by patients. 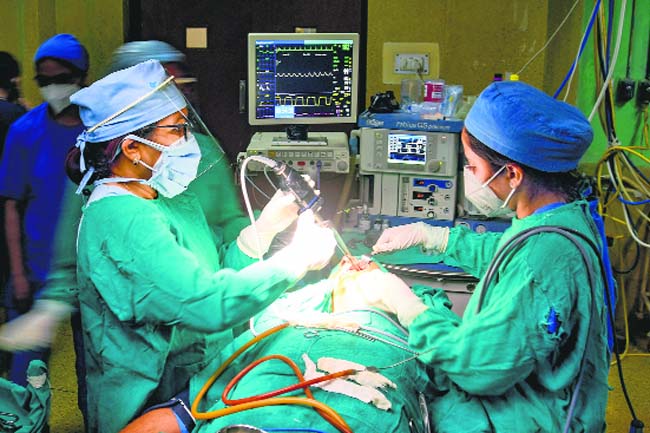 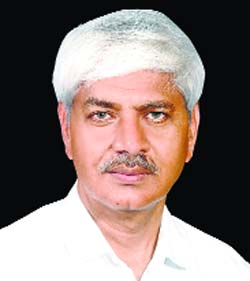 THE surge in Covid-19 cases in the second wave has declined to a great extent as the disease is hardly active in less than 100 districts of India. The wave saw a sudden increase in Covid-19-Associated Mucormycosis (CAM) cases. The disease has been widely called ‘black fungus’, basically a misnomer because there is already a group of black fungi in medical literature known as dematiaceous or phaeoid fungi. The media might have coined this oversimplified term because the lesions are blackish in colour due to local necrotic (dead) tissues. This group of fungi invades the wall of vessels (angioinvasion), thereby obstructing blood supply in the respective body part.

Mucormycosis is not a new disease and is regularly reported by medical institutions. But during the second wave, its caseload increased enormously. By

July 15, there were 45,432 cases and 4,252 deaths in India. Pakistan, Sri Lanka, Bangladesh and Nepal also reported CAM cases, but not to this extent.

This disease was declared under the Epidemic Diseases Act, 1897, on May 20, wherein all government and private health facilities were to follow guidelines for screening, diagnosis and management. Henceforth, all cases are to be conveyed to the World Bank-funded Integrated Disease Surveillance Project (IDSP) of states and UTs. Professional bodies like the ICMR, NCDC, Fungal Infection Study Forum, European Confederation of Medical Mycology and the International Society for Human and Animal Mycology have also released their respective advisory.

Mucormycosis is an acute infection caused by several fungal agents belonging to the mucormycetes group. In one-third of the cases, the causative fungi are of a mixed nature i.e. mucormycetes with another fungus, usually Aspergillus species. These fungi are found ubiquitously in soil and our surrounding environment. In the past, these mucoralean fungi used to be taken as non-pathogenic to humans and animals. They were also considered as fungal contaminants. In labs, these are known as ‘lid-lifters’ and in houses as ‘bread moulds’ due to fast growth.

The understanding about mucormycetes has changed because these are emerging as highly opportunistic pathogenic organisms, invariably entailing fatal consequences, especially when an obvious underlying predisposing factor like poorly controlled diabetes mellitus, malignancy or trauma already exists in a particular clinical setting. In South-East Asia, diabetes mellitus, whereas in Western countries, malignancies are the risk factors. Cases are being increasingly reported among healthy individuals also where there is no apparent underlying risk factor present. The commonest symptoms are one-sided or bilateral facial swelling, headache, nasal or sinus congestion, blurred vision and pain in eye with blackish lesions on the nasal bridge or upper inside of the mouth.

Why has there been an upsurge? It was not there during the first wave, and all of a sudden, so many CAM cases cropped up throughout India. It began with a few cases reported from Sir Ganga Ram Hospital, New Delhi, and almost simultaneously from Gujarat, followed by Maharashtra, Rajasthan and Karnataka. Subsequently, cases poured in from almost every state. Most of the patients had recovered from Covid-19, but came back with fulminant CAM. Various risk factors are contemplated; however, evidence-based studies are to be carried out before reaching a definitive conclusion.

There was injudicious use of steroids (recommended dexamethasone 0.1 mg/kg; methylprednisolone 0.5-1.0 mg/kg) to avert cytokine storm and in high doses than the prescribed one and for a prolonged duration. Some states have even distributed dexamethasone to the public along with home isolation kits. The other risk factors may be prolonged use of contaminated masks without changing. There is a strong possibility of the use of a contaminated accessory during inhalation of oxygen by patients.

During the peak of second wave, there was an acute shortage of medical grade oxygen. Hence, most hospitals had to shift to industrial oxygen. Although it is said that there is no basic difference between both grades except for the minor one of dispensing, but the public at large still suspects it to be one of the causes. The humidifiers used, i.e. distilled water versus sterile or even tap water was also alleged to be a source. Moreover, frequent steam inhalation, six-seven times a day, is also considered as a risk factor.

There is a higher level of iron, in the form of ferritin, among Covid-19 patients, which is favourable for the growth of mucormycetes. In addition, most people took zinc as a preventive or therapeutic agent, which is also conducive for fungal growth. Some of the reports state that the Delta strain of SARS-CoV-2 (B.1.617.2) was targeting the islets of Langerhans in the pancreas through ACE2 receptors, insulin production, leading to a diabetic state among patients during the recovery phase.

The diagnosis is not difficult. If done at an early stage, half the battle is won. CT scan and MRI are useful to know the extent of the disease. The CT score is also useful to categorise Covid-19 as mild, moderate or severe.

For treating CAM, first of all, parallel to managing Covid-19, the underlying risk factor (uncontrolled diabetes mellitus and ketoacidosis) has to be reversed. Second, extensive surgical debridement of the local necrotic tissue must be done. Delay may cost the life of the patient. Third, the anti-fungals are given in the form of amphotericin B (Conventional or Liposomal). There was an acute shortage of these drugs due to high demand. Hence, the government managed supply by rationing on a daily basis. The other drugs used are posaconazole and isavuconazole as injectable and oral formulations. Early detection and surgery followed by appropriate multi-disciplinary assessment is the key to success. Covid-19 patients should monitor their blood sugar levels for 4-6 weeks after discharge. Let’s hope such a situation does not emerge during the looming third wave among children after a month or so.