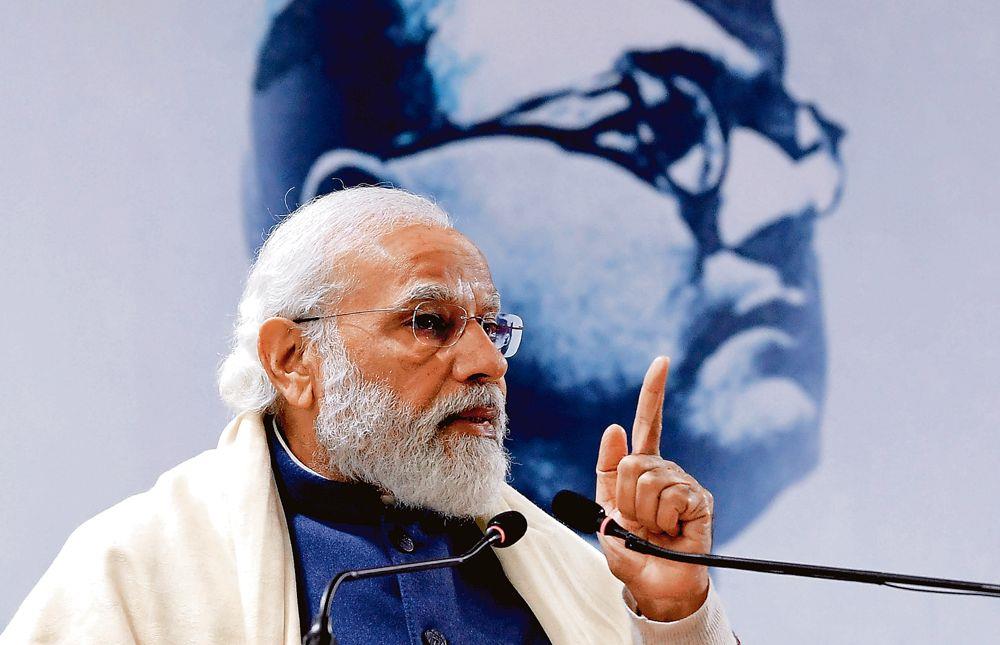 Visionary: Bose was the antithesis of Savarkar — in a hurry to militarily defeat the British; in a rush to create Hindu-Muslim unity; and have women in combat roles. PTI

This Republic Day offered a string of ironies. The most delicious of all was PM Modi unveiling the hologram of the proposed statue of Subhas Chandra Bose at India Gate three days earlier. Netaji is going to stand under a canopy once built for the Emperor of India, George V. There could not have been a greater revenge of history than this statue, for it is also a Savarkarite government that is symbolically avenging the death of Netaji and the defeat of his Indian National Army. Had Bose successfully marched into Delhi, he would not have been as kind to the British allies — Savarkar, Ambedkar and Jinnah — as the Congress was.

The ruling Right’s appropriation of Netaji is the shifting of the politico-cultural backdrop of debates from medieval to modern Indian history.

Bose was a staunch votary of Hindu-Muslim unity and abhorred all those who compromised with or wrote mercy petitions to the British, to the extent that he relentlessly fought within the Congress against Mahatma Gandhi’s leadership, which he believed was not aggressive enough, though it was Bose who called Gandhi ‘father of our nation’ first. He referred to Jawaharlal Nehru and himself as the ‘left’ opposition within the Congress, lamenting that Nehru succumbed to the Mahatma’s charms. Soon after the execution of Bhagat Singh, Sukhdev and Rajguru, Bose presided over the Naujawan Bharat Sabha in Karachi, where the Congress too had its session. He was the antithesis of Savarkar — in a hurry to militarily defeat the British; in a rush to create Hindu-Muslim unity; abolish untouchability; and also to have women in combat roles.

So, instead of relishing the irony of Savarkarites having had to appropriate Netaji, some Liberals foolishly did what they know best: they began calling Netaji a Sanghi simply because Modi honoured him. For, in the new India of anti-historical binaries any icon who gets honoured by a BJP government ought to be a Sanghi, however anachronistic the labelling be — even if the person predates the RSS, as in the case of Swami Vivekananda, who died in 1902, some 23 years before the RSS was founded. The Liberals racked their brains and stretched their imagination to forge a connect between Bose and Hindutvawadis by claiming that both were admirers of Hitler. They conveniently forgot that British PM Neville Chamberlain had struck an agreement with Hitler while Stalin had a friendship pact with Hitler and became a noble fighter against Nazism only after the German war machine began rolling into Soviet Union.

Both the BJP and the Liberals do not seem to have remembered the INA motto in Arabic/Urdu — Etihad (unity), Etmad (faith) and Kurbani (sacrifice) — before the former owning Netaji or the latter disowning him. Even his marching song, kadam kadam barhaye ja, refers to khuda and not bhagwan. For a spiritually and culturally anchored intellectual who is said to have read the Gita every day, Bose should have been a true Gandhian to have imagined an immersive integration of cultural and religious symbols to forge the only identity that mattered to him — the fiercely free Indian. Also, Bose had noted in his autobiography the syncretic past of his illustrious family. He proudly writes that his father was 13th in descent from Gopinath Bose, a minister of a Muslim king of Bengal, who was honoured by the court with the title Purandar Khan.

Another facet of the ruling Right’s appropriation of Netaji is the shifting of the politico-cultural backdrop of debates from medieval to modern Indian history; from Bhagwan Ram to Netaji Bose. It is difficult to flog the Ayodhya temple issue any longer — the case has been won, the temple is getting built and there cannot be any further campaigns to right the wrongs against the Lord. The Kashi and Mathura temples can be talked about, but without the kind of political opposition the Ayodhya issue generated, these two cannot be expected to rouse communal passions. In fact, the Samajwadi Party and others seem to have understood that it is counterproductive to take on BJP over communal issues. The Muslim votes that would accrue by championing these causes would not be enough to bridge the yawning gap created by the loss of Hindu votes.

So, if the medieval history ammunition is spent, then there is much left in modern history’s armoury. Netaji fits the bill perfectly. He sacrificed his job in the Indian Civil Service, his position in the Congress, suffered exile and fought and died young, while all his ‘effete’ contemporaries lived to enjoy high office in the new nation and the fruits of Independence. He was just 49 when he died in the air crash, too young a military icon in uniform for any history buff to not weave what-if scenarios. But most importantly, he was an icon waiting to be adopted because the Congress had abandoned him along with most of the heroes of the freedom movement, with the exception of Nehru.

Politically, the most interesting aspect of the turn towards modern Indian history by the BJP is the latent aggression in the choice of the canopy at the India Gate for Netaji’s statue. It can be compared to the destruction of the Babri Masjid and the building of the Ram temple at Ayodhya at the same site. Sure, George V’s statue was vandalised and subsequently removed long ago, but the choice of the location for the statue and symbolism of placing the biggest military icon of India’s freedom movement there are unmistakable. Can it be construed a second stage in the progression of Hindutva politics? Will it be accompanied by a campaign for the erasure of other British legacies?

So far the biggest colonial intellectual legacy was to constantly critique Gandhi and even un-intellectually label him this or that without realising that it was the Gandhian commitment to truth and reconciliation that allowed us to partake of the best from our worst invaders. And the final irony is this — the only legitimacy now for the British military band hymn ‘Abide with me’ is Gandhi’s love for it.