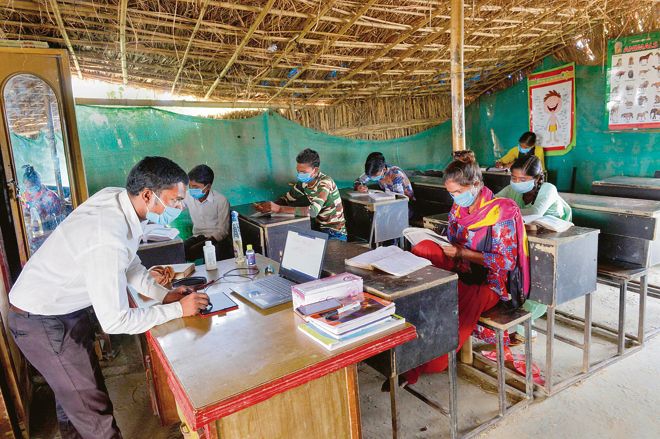 The chasm: Online education should not only be accessible, but also affordable. PTI

On Guru Purnima this year, a Marathi poem went viral on WhatsApp. It is a poignant tale of a girl student in a village school, who like crores like her in India, has been affected by the prolonged Covid-induced lockdown. She narrates her plight to her favourite teacher. Its gist: “Respected teacher, I am sorry for not being able to pay my respects to you in person today. Corona snatched away my father. I have left the village in search of work to feed my family. Online education is beyond me; how can I afford a smartphone? But one day, I want to come back and sit in your class.”

The poem brought tears to my eyes. I immediately recalled Shah Rukh Khan’s TV and print ads of Byju’s during the lockdown, for which the online tutorial company must have spent a fortune. “Just download Byju’s, the all-new learning app,” Shah Rukh tells children and their parents. “Progress guaranteed.”

This online tutorial company was founded ten years ago by Byju Raveendran, whose market value has now reached $16.5 billion (Rs 1,22,000 crore) — more than double the Modi Government’s annual budget for school education (Rs 54,873 crore). His own personal wealth has soared to $2.5 billion (Rs 18,000 crore). Byju’s now has over 40 lakh subscribers. No doubt, this has been made possible by aggressive advertising, and by charging fees that only the rich and upper middle-class families can afford. Several other companies offering online education have also sprung up. The mainstream media hails them as India’s start-up success stories by young billionaires.

Now, someone will surely ask: “Why are you objecting to Byju’s and other such companies providing excellent digital learning tools to our children?” Good question! Indian students having access to high-quality digitally-enabled education is most welcome. What’s saddening and deeply troubling is this: Those who ask such questions either do not know, or do not care, about two large categories of students in India. One, poor students in villages and urban slums who have no access even to a smartphone, leave alone the tablet that comes along with Byju’s fee package. Two, children in middle and lower-middle class families who can never afford the fancy learning apps, which are mostly in English. Hence, the entrenched discrimination against education in native Indian languages has been exacerbated in the online space. Haven’t all of us seen this digital disparity during the corona lockdown period? With schools closed, crores of poor and middle-class students have been pushed behind, whereas their rich counterparts have progressed.

The world over, inequities in education perpetuate and further widen socio-economic disparities. This is true even about the US, the world’s wealthiest nation, and also China, which is fast catching up. But Beijing has now begun tackling this problem in a unique way. In an unprecedented crackdown, the Chinese government issued guidelines last week that could force its online tutoring companies to become non-profit organisations. Immediately, their share prices crashed. Why has China taken such stern steps to rein in its booming $100 billion private education industry?

The answer lies in two important speeches its President Xi Jinping delivered on this subject — first at a national conference on promoting ‘socialist education with Chinese characteristics’ in 2018, and then at a session of the country’s top legislative body in March this year. He criticised the big-money tutoring sector as “a chronic disease”, which must be cured. Because of stiff competition for good jobs, many Chinese parents prefer after-school tutoring classes for their children, paying fees that in some cases account for 30 per cent of the family’s total annual spending. This is sharply widening inequality in Chinese society. Therefore, Xi Jinping said China needs an education system in which all schools have improved facilities for all students.

In recent speeches, Xi Jinping has called for strong measures against the “disorderly expansion of capital”. This means, the nation’s financial resources should flow in such a manner that they satisfy the needs of the common people — and not benefit only the rich. In other words, education should not become a for-profit business — access to ‘Sarasvati’ should not be determined by ‘Laxmi’.

Under the new Chinese guidelines, authorities have been asked to reduce homework load, raise quality of school education, and standardise education services. The government has pledged to spend more to increase free online learning services, including by supporting non-profit tutorial firms. Importantly, it will prohibit foreign investment into such businesses. In contrast, almost all online education companies in India, including Byju’s, have big foreign investors.

China has another important reason. Declining birth rates, aging population and shrinking workforce because of the earlier one-child policy compelled the government to introduce a new three-child policy on May 31. However, it sees the private tutoring industry as a major obstacle to raising birth rates, since it burdens parents with exorbitant education fees. More children mean having to spend more on tuitions. One Chinese feminist wrote on Weibo (the equivalent of Twitter): “It’s not like we don’t want to have kids. But as soon as we have kids, our life falls apart. That’s why women don’t want to be mothers.”

How far will China’s extraordinary steps succeed in reorienting its education system towards greater equality and social justice? Time will tell. However, after reading all these developments in China, my mind again went back, sorrowfully, to that WhatsApp poem in Marathi. Do our politicians and policy-makers have the ears to listen to that poor village girl’s lament: “Online education is beyond me; how can I afford it?” And do they have the commitment to act?