India belongs to all 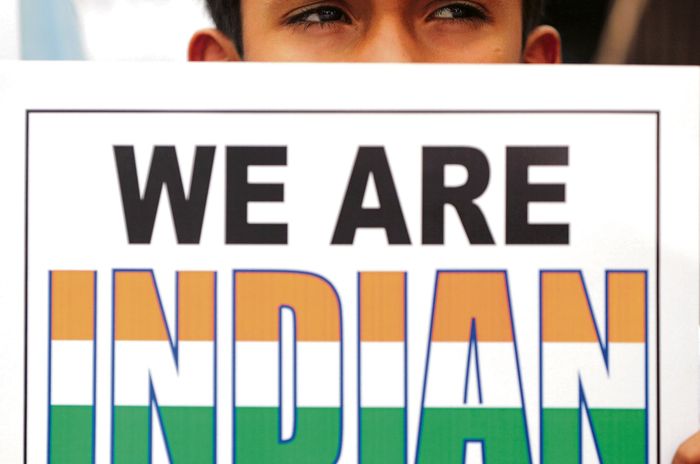 There’s hope: It is heartening that young students belonging to different faiths are defying the power of a coercive state to reclaim the vision of India.

It is ironic that the year in which we celebrate the 150th anniversary of Mahatma Gandhi, the Father of the Nation, we are locked in a debate about what kind of country should India be. Was not this issue settled when, after intense, but always civilised debate, a Constitution for the Republic of India was adopted on January 26, 1950? All the diverse communities of India, all shades of opinion and political persuasions were represented in the Constituent Assembly. They worked under the shadow of the trauma of the Partition and the assassination of Gandhi. This was an India still in the making. Its future was uncertain. Yet, the leaders of independent India were still able to put together a charter to guide the newborn nation, at once practical but also visionary. The Constitution draws inspiration from what is best among India’s own civilisational attributes, but also acknowledges the imperatives of a modern, egalitarian and enlightened society. In the past seven decades, India has often fallen short of the benchmarks it set for itself. But today is different because the benchmarks themselves are being questioned, derided and violated. It is some reassurance that those who undermine the Constitution still feel compelled to swear by it. Nehru may have been discarded but Gandhi still enjoys residual shelf life.

The Citizenship Act Amendment (CAA) is significant not for this or that specific clause but because it announces an imagining of India starkly different from what the Constitution envisioned. For the very first time, there is a law which introduces a distinction based on religious faith with respect to citizenship. This is irrespective of the claim that existing Muslim citizens will be unaffected by it. This is not the same as affirmative action based on social or economic infirmities accepted in the Constitution. It is possible that the arcane technicalities will be found by courts to validate it but that will be papering over the grievous wound inflicted on the very fabric of the Constitution.

The alternative imagining of India is a country that privileges the adherents of the Hindu faith. It is based on the as yet untested assumption that an overarching Hindu identity, ranging across sectarian, caste, regional and linguistic differences can be constructed on a Hindu-Muslim binary. The Hindu rashtra concept builds on this assumption. The case of Assam may suggest otherwise. The Constitution also strives to create an overarching Indian identity but one which is based on citizenship which transcends, but does not seek to either privilege or suppress these separate identities, including religious identities. Citizenship, as defined in the Constitution, is individual based and has nothing to do with other affiliations or identities that an individual may have. He enjoys fundamental rights as a citizen and this is not subject to his affiliation with any social or religious community. It is this concept of citizenship which the CAA has violated.

The CAA is a matter of concern also because of what has preceded it and what is intended to follow it. On August 5, Article 370 was suspended, J&K was bifurcated into Union Territories, and a virtual lockdown was imposed in the Muslim-majority Valley which mostly remains in place. Internet access has been denied to the residents of the Valley but they may now take consolation from the fact that this is also occasionally the fate of fellow citizens in several other parts of the country, including UP. Then came the historic SC judgment on the Babri Masjid case. Curiously, the acts of placing idols in the precincts of the masjid and the subsequent demolition of the masjid itself were held to be criminal acts, and yet, the judgment was in favour of a Ram temple being constructed at the same location. Decisions by the ruling party to make Yogi Adityanath the Chief Minister of UP despite his record of deep antipathy towards Muslims and the nomination of Pragya Thakur, who glorifies Gandhi’s assassin, Godse, as a candidate for election to the Lok Sabha, which she won handsomely, all point to an unmistakable pattern, an incontrovertible direction. If there are doubts about where we are headed one should see the video, which has been widely circulated, of schoolchildren in Puducherry re-enacting the demolition of Babri Masjid as a glorious historic achievement and being applauded by the Lt Governor. The government’s obfuscation over the updating of the National Population Register which has commenced, the creation of a National Register of Indian Citizens which is to follow and the construction of detention centres where those of doubtful citizenry may be held, seek to camouflage an intent to create an India very different from what we signed to as ‘We the People of India’ in 1950. This is what lies at the heart of the struggle unfolding on the streets across India. It is heartening that it is young students belonging to different faiths, who are together defying the power of a coercive state to reclaim peacefully the vision of India enshrined in the Constitution.

Good governance needs credibility, transparency and accountability. These attributes are becoming hard to find in the current ruling dispensation, whether in respect of political or economic decision making. Above all, in a democratic country, the state must not raise its fists to rain blows on its citizens. ‘Sabka Saath, Sabka Vikas’, and the additional element the PM has now added, ‘Sabka Vishwas’, should not remain a politically expedient slogan. It should become the benchmark for all government action, for it truly imbibes the spirit of the Indian Constitution.