The party has succeeded in fusing hyper-nationalism with political Hinduism 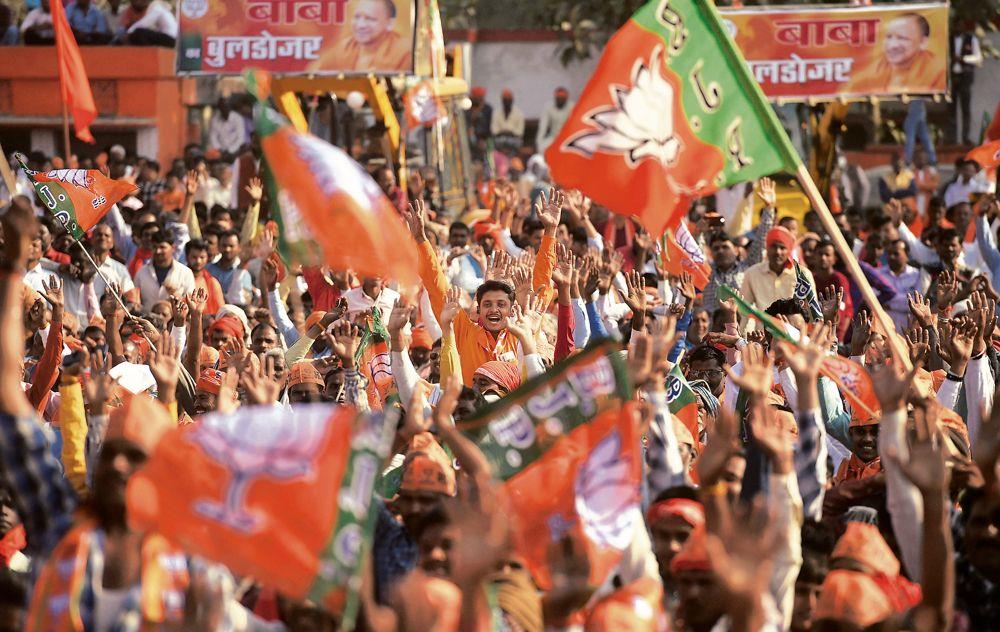 Onslaught: The BJP’s acceleration has run parallel to the Congress’s decline. PTI

Alargely unanticipated but significant transformation in India’s post-Independence polity has been the emergence, exponential growth and near hegemonic position attained by the BJP. If the Congress had an overarching influence over the polity for over four decades since 1947, the BJP is set to appropriate this status in the foreseeable future. But that’s not how the BJP’s saga started.

Seismic changes wrought by the BJP constitute the most significant political development after Independence.

The Bharatiya Jana Sangh (BJS), the BJP’s forerunner, was founded four years after India’s Independence but barely left an imprint on the polity except when it assembled a coalition with the non-Congress entities from the socialist stream. The BJS’s political philosophy contained elements of the BJP which were never fashioned into a coherent ideology. Its outlook was fuzzy because it subscribed to the concept of ‘integral humanism’ and believed in social conservatism and swadeshi economics. It was recognisably embedded in the now reshaped and recognisable notions of an ‘Akhand Bharat’ and the evolution of a single ‘Bharatiya’ culture. The BJS’s high point was trumping the Congress in the 1967 General Election, but only after it regrouped with the Bharatiya Kranti Dal, Samyukta Socialist Party and the Praja Socialist Party to form the Samyukta Vidhayak Dal governmnent.

In 1977, the BJS merged with the Janata Party in an experiment that was a disaster in hindsight but occasioned by the Emergency and Indira Gandhi’s decision to call a snap poll. Opposition ‘unity’ was paramount and the BJS’s ideological mentor, the RSS, had no issues making common cause even with the Left in the pursuit of power—a hallmark of the Sangh’s strategy. In 1980, the BJS pulled out of the Janata conglomeration and the BJP was founded.

In the second inning of its political progeny, the RSS assumed a more interventionist role, and was determined to let ideology become the cornerstone of the BJP’s growth even as it was not averse to doing business with vaguely similar groupings which were opposed to the Congress. The BJP got off to a slow start, was nearly vanquished in the 1984-85 elections but shepherded by the Sangh, found its feet by 1989. The BJP played a critical role in shaping the National Front-Left Front government, led by VP Singh, but withdrew its external support once the message from the ground in northern and western India was articulated in clear terms. The ‘movement’ to ‘liberate’ the ‘birthplace’ of Lord Ram in Ayodhya fired the imagination of a large part of the electorate and brought electoral dividends to the BJP. Its voters had no use for the ‘minority-appeasement’ policies of the Congress, the Left and the socialists. Ayodhya symbolised the issues that had exercised sections of Hindus for a long time, notably the need for a common civil code that would nullify the ‘privileges’ afforded by personal law and deny Kashmir a ‘special’ status. The BJP played to the gallery. From there on, its rise was exponential.

The course it mapped culminated in the most significant transformations the polity saw after 1947. The changes the BJP wrought in the political structures and sub-structures were seismic and challenged, and eventually demolished some of the certitudes held dear for decades by political leaders. It was as though the party had mined the subliminal emotions of large sections of the majority community and channelled the sentiments into a hardcore agenda that fused hyper-nationalism with political Hinduism.

The BJP’s rise proved the dictum that notwithstanding India’s diversity and plurality, its polity can centre round only one national pole. The Congress has ceased to be the axis around which politics revolved. The BJP and Congress cannot coexist as two opposing poles of commensurate strength. The BJP’s acceleration ran parallel to the Congress’s decline. If the Congress aimed to project itself as a robust foil to the BJP, it would have called for a sharp enunciation in word and deed of its founding principles of secularism and socialism. That was a big demand. As the BJP disseminated its version of Hinduism and found a ready audience for the rhetoric and practice of targeting the minorities and dissenters, the Congress was unable to defend what it stood for. The pre-Independence divide in its ranks on the issues of secularism and socialism got more sharply accentuated in a BJP-dominated era. The Congress ought to have owned up the success achieved by the Narasimha Rao-Manmohan Singh duo in bringing the economy back on track and gifting a horn of plenty to the middle and upper classes after economic liberalisation. Instead, the party could not bring itself to acknowledge the role of two individuals from outside the Gandhi family. The issue got muddled in successive debates over plenitude versus poverty which largely obliterated the genuine benefits of economic reforms. The BJP, meanwhile, enshrined reforms in its manifesto and policies after jettisoning the proponents of swadeshi economics in its rank. Pragmatism was the byword in its practice of politics under the garb of ideology which was unsheathed to get the votes.

The BJP’s greatest success lay not just in undermining the Congress but presenting its divisive ideology as acceptable to regional forces that were once shy of uttering Hindutva. If a semblance of political opposition still exists, it is manifest in a few federal parties which struggle to retain their space against the BJP’s onslaught. But there is little scope of consolidating an Opposition of the kind seen in the times when the Congress was dominant. The parties have none of the resilience and spontaneity which culminated in the anti-Congress experiments of the ’70s and ’80s.

A factor that cannot be ignored is the sway which the BJP and the Centre exercise over the institutional domain. Every instrument of the state, meant to coerce the Opposition and dissenters, is theirs for the asking. The Congress had abused such ‘privileges’ in the past but the BJP has taken it to another level.

In engaging the BJP, the Opposition lacks a level playing field.