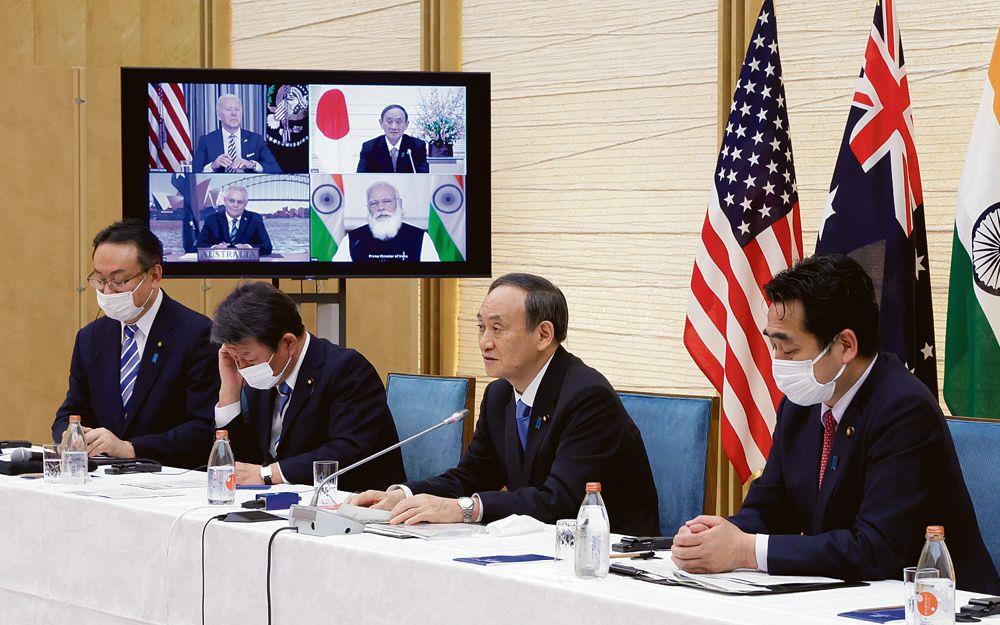 Consolidation: The US is resorting to artificial insemination with ideological content — democracy versus autocracy — to ease the formation of blocs. Reuters

The leak by the Financial Times that Chinese president Xi Jinping parried an invite to a summit from US President Joe Biden has produced an ugly reaction by the White House. Coincidence or not, a week later, the US has announced a ‘new trilateral security partnership’ in the Indo-Pacific against China with two ‘maritime democracies’ Britain and Australia, called AUKUS.

Quad is getting a stepbrother nearly 15 years younger. It already has an Asian half-brother who is hardly talked about, born out of an improbable relationship between the US, Uzbekistan, Afghanistan and Pakistan — the quadrilateral diplomatic platform to energise regional connectivity to counter China. But that was just before the Taliban came and spoiled the party. Thus, Uncle Sam now has a menagerie of three Asian children, albeit by different mothers. While Quad is an unemployed youth looking for business opportunities, Quad. 2 was conceived with dreams of competing with China’s Silk Road ambitions in Inner Asia, whilst the AUKUS plans to equip Australia with nuclear-powered submarines that can be used as platform for second strike capability in the event of a nuclear war.

The triad’s similarities in DNA are no secret. Obviously, Beijing isn’t amused. Late at night on Thursday, Beijing announced that it has officially applied to join the Comprehensive and Progressive Agreement for Trans-Pacific Partnership (CPTPP), the revised version of a regional trade pact originally initiated by President Obama aimed at containing China’s rise. China is taking a giant step after the signing of the Regional Comprehensive Economic Partnership (RCEP). While the RCEP is an Asia-centric pact, the CPTPP is geographically more far-reaching and a high-standard trade deal that would cement China’s pivotal role in regional and global trade integration. It will further hollow out the US domestic industries and erode economic strength.

The geopolitics of Asia-Pacific is becoming zestful. Something fundamentally changed in the co-relation of forces following the US’ defeat and exit from Afghanistan. The domestic mood in America has radically changed in favour of withdrawal from foreign entanglements. Americans no longer accept spending blood and treasure on distant missions when the home front is beset with acute problems.

We are at the threshold of a new era where the textbook definition of war becomes archaic, as vindictive geopolitical partners turn to trade, finance, migration, pandemics, climate change, and the Internet. This is not war as we knew it nor is it the peace we long for. Alas, the world has entered an age of perpetual competition among powerful states.

How far India is equipped to navigate this tempestuous era becomes the moot point. Europeans seem to be adjusting to the reality that America cannot reclaim its leading role on the world stage until it heals its internal wounds. But in India, an influential section of opinion is still full of nostalgia for the ‘unipolar moment’. They refuse to see the bold writing on the wall that the Biden administration is pursuing a ‘foreign policy for the middle class’, firmly anchored in a deeply divided domestic sphere — and the ranks advocating increased international engagement are depleting rapidly.

Of course, the end of the ‘forever war’ in Afghanistan will not mean that the US intervention in that unhappy land has concluded. The US is retooling in order to re-establish its say over Afghanistan. This time around, it will be by manipulating frozen funds, aid flows and access to the dollar. Surely, the confrontation between the great powers is going to be the main point of US policies.

The two speeches by Biden — on August 16, where he commented on the circumstances surrounding the completion of the US mission in Afghanistan, and his statement on September 1 justifying the rationale behind his decision to end the ‘forever war’ — have presented new markers in the US foreign policy. Delhi should prepare for the upcoming Quad summit by rigorously applying these guiding principles that Biden outlined, and by eschewing any false notions of a ‘defining partnership’.

This summit should be a sobering moment. Fundamentally, Indians must come to terms with the reality that the ‘unipolar moment’ has become history. The toolkit of military-political instruments used in that bygone era for achieving foreign policy goals (from armed intervention to ‘colour revolutions’) are being put away in the attic. Superficially, this may appear to be a positive shift. But what is about to follow is a brutal geopolitical competition. The US is resorting to artificial insemination of an unyielding world order with an ideological content — democracy versus autocracy — in order to ease the formation of blocs and the restructuring of international politics. India should steer clear of the US’ rites of passage.

Biden basically announced that America would focus on itself and its problems to ensure its own security and fight strategic rivals (China and Russia), and has no more use for a transformational approach to change the world on a global scale. Indian policymakers and strategic community must understand that the US is switching to openly selfish policies geared exclusively to itself with rules being pushed aside.

Thus, AUKUS enables the US to steal France’s whopping $90 billion submarine deal with Australia. France is livid. Foreign minister Jean-Yves Le Drian condemned Australia’s passive acquiescence to America’s pitiless break-in and the burglary as a ‘stab in the back.’ He said, ‘This brutal, unilateral and unpredictable decision reminds me a lot of what Mr Trump used to do. I am angry and bitter. This isn’t done between allies.’ Indeed, if this can be done to allies, what awaits ‘partners’ like India shouldn’t be hard to divine.