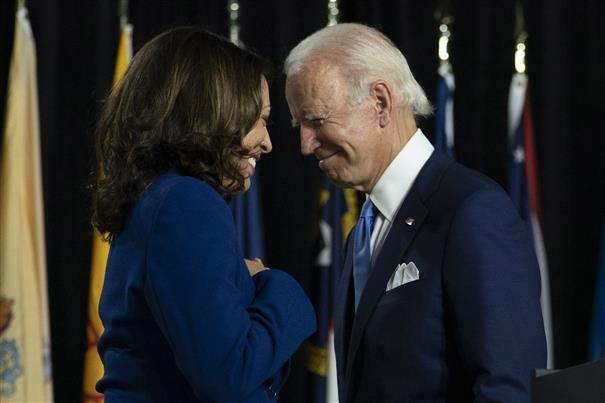 Kamala Harris’ historic selection as the Democratic vice-presidential candidate has evoked mixed reactions from the influential Indian-Americans, with a majority of them voicing unfavourable views about the senator’s track record and her stance towards India and the community.

Democratic presidential candidate Joe Biden scripted history on Wednesday by selecting 55-year-old Harris, an Indian-American and an African-American, as his running mate in the election on November 3.

Born to a Jamaican father and an Indian mother, California Senator Harris, if elected, would be the first woman vice president ever for the country.

While her nomination has filled many aspiring women, particularly young women of colour, with joy across the globe, Harris’ selection has also generated mixed reactions from about 3.9 million Indian-Americans, both Republicans and indecisive voters, who believe she lacks understanding of what she stands for and does not consider herself as a woman of Indian origin.

Radha Dixit, the founding member of Indo-American Conservatives of Texas, said, “The Democratic Party’s reliance on ‘Identity politics’ has undermined her campaign because the focus has shifted to her being Indian, Asian, Jamaican, African-American and a woman of colour. Divisions in these communities are now coming to surface. Nowhere did Kamala try to claim her Hindu or Indian heritage but people are thrusting their values on her”.

“If the Democratic Party platform and Kamala Harris’s position on policy issues are the basis for deciding this election as it should be, no conservatives, men or women, will support this ticket,” Dixit said.

Padma Shri awardee Subhash Kak, Regents Professor Emeritus at the prestigious Oklahoma State University is pleased with Harris’ selection but is not happy with her political affiliation.

“But I’m disappointed with her political positions that are not India-friendly and are far to the left on the political spectrum. In this, she appears to be consistent with Joe Biden who has adopted an agenda that does not acknowledge the need for a special relationship between the United States and India,” Kak said.

“She has always claimed to be of African descent rather than Indian and her record as an attorney in California is highly questionable. She has in fact promoted corruption in California,” said Aditya Satsangi, founder Americans4Hindus, an organisation that represents the interests of Hindus.

During her maiden address to the Indian-American community, Harris, however, did reflect on her proud Indian heritage.

“Growing up, my mother would take my sister Maya and me back to what was then called Madras because she wanted us to understand where she had come from and where we had ancestry. And of course, she always wanted to instil in us, a love of good idli,” Harris said.

“She has solid credentials, but do we need to support a person who is a known critic of India’s Kashmir policy and has a strong leaning towards Pakistan. She has recommended abolishing the legal immigration process and supports illegal immigration which hurts people from countries like India, who come here legally,” Vyas said.

“Harris is a supporter of the anti-India, anti-Hindu brigade, who calls herself Black, hates Indian side of her family, never recognised herself as an Indian,” said Radhika Sud from Atlanta.

She is unaware of the atrocities of Kashmiri Hindus and has aligned with Pakistan. Indian-Americans won’t vote for pro-Pak, pro-China Harris, just because her mother happens to be Indian, she said.

“I would evaluate her on her past policies towards American Hindus and her future approach towards the community. On the first account, I do not see her having given any significant contribution. As for the future posture of the Biden campaign, I am concerned about the public bias they have shown against the American Hindu minority with their policy pronouncements,” said Utsav Chakrabarti, Executive Director HInduPACT.

Rajiv Verma, a Houston community activist, believes that with Harris as Vice President, the Biden campaign has wilfully forfeited any hopes to get the Indian-American votes as she opposes both removal of Article 370 and passage of the new citizenship amendment act by the Indian parliament.

“Harris’ uninformed comments on Kashmir are interference in another sovereign country’s internal matter and are setting up a dangerous precedent for American politics. The fact that the Democrats have shown no understanding of why India has taken the steps it has, makes me think they are purposely being obtuse,” said Professor Amulya Gurtu from California.

“Harris needs to brush up her knowledge of Indo-US relations, failing which the votes of admiring Indian-Americans are not likely to translate into votes for the blue ticket. The present Indo-US relations with Modi-Trump chemistry is at its peak since centuries and Indo-American voters are happy with that,” said Subhash Razdan, Chairman and Co-Founder of Gandhi Foundation USA, in Atlanta.

“My decision not to support Kamala has nothing whatsoever to do with whether she identifies as Indian or Black. It’s about all the Democrats, including her & Biden, toeing the line for vile Kashmiri terrorists in my ancestral homeland of Kashmir,” said Dr Vasudev Patel, president Federation of Indian-American Association. PTI