Dedicated to Shrinath-ji, the Pichhwai paintings are a haunting passion for devotion : The Tribune India

Dedicated to Shrinath-ji, the Pichhwai paintings are a haunting passion for devotion

There is something in the Pichhwai paintings dedicated to Shrinath-ji that remains elusive, almost unknowable 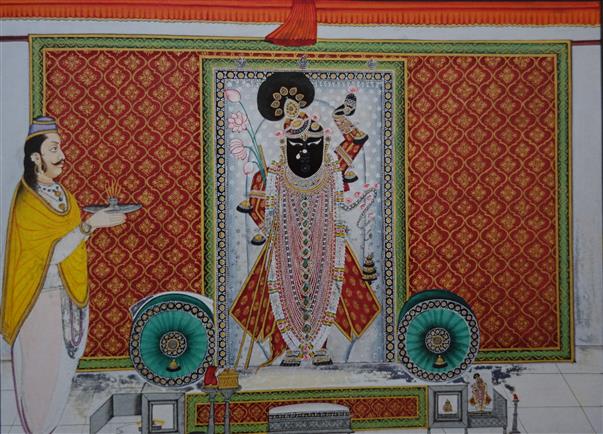 A Pichhwai painted for the first day of a new year. Shrinath-ji is described as wearing a 'kuhle paag with morapichha jod, mayur-akriti kundala, and khule bandh ka wagha'.

We may feel assured that paintings (like a Pichhwai) such as this implied to a Vaishnava not merely a pastoral genre, but more than a mere illustration of the Krishna Lila conceived as an historical event. Like the Lila, it represents not so much a given time or place as a condition of being, a haunting passion of devotion, a presently accessible experience.

Under Sukhdev, six artists, including his younger brother Hardev, worked on the project (of illustrating the entire Bhagavata Purana). The project concluded in 1916 CE, with a total of 960 paintings executed over 35 years.

THERE is something so enveloping, so riveting, in the atmosphere that prevails not only at the sacred shrine — the haveli of Shrinath-ji where Krishna in his svarupa of the great Mountain-Bearer is worshipped — but in the entire town of Nathdwara, that it is hard to describe it. One can do this only through citing, or recalling, a personal experience, perhaps. I remember the very first time, long years ago, when I made my way, along with Karuna, my wife, from Udaipur to this great centre of Krishna devotion. It is not easy to gain darshan of the idol, we knew, for only eight times in the day, strictly at aarti time and for a very short duration, is the sanctum thrown open to the public. And one has to wait, and wait, for the moment.

We stood, or sat, in the spacious courtyard outside for our turn, and just then, a mendicant singer, aged and blind, began to sing a bhajan in a soulful voice. ‘Bandaun charan saroj tihaare’ (I bow to your lotus-feet, Lord), it was, I think, one of the great compositions of Sur Das, the ‘blind bard of Mathura’. We were transfixed: the words, the music, the entire gathering of devotees suddenly folding their hands as if in prayer. It felt as if — ‘call me mad, if you like, or at least gullible,’ as a poet said — Sur Das, a great devotee of Krishna and the first among the ashta-chhap kavis — eight great poets who got attached to the shrine some 400 years ago — had appeared there himself, all of a sudden. And when, hours later, after we had had the darshan, we came out of the temple complex and stepped into the bazaar outside, some vendor thrust at us a newspaper that he was trying to sell, we were completely disoriented. For, the day’s newspaper — the here and the now of everyday life — hurtled us suddenly into real time, something we had almost lost track of by then.

Like the shrine itself, Pichhwais — those great ‘Temple Hangings’, or ‘Sacred Textiles’, in a manner of speaking — which are inextricably linked to Krishna-worship at Nathdwara, are a world unto themselves. The word, literally and simply, means something ‘at the back’, or ‘behind’, comes as it does from the Hindi word peechhey, derived in turn from Sanskrit prishtha; in relation to the Shrinath idol, therefore, it connotes something that was hung behind the sacred image as an adornment. But over time, these began to be made not as ‘something at the back’, but as independent objects, though always redolent of the presence of Krishna, and hung or displayed as objects of reverence, if not worship, in shrines, havelis, homes. In one form or the other, or medium — painted, embroidered, printed and woven — they were, and are, around in an endless variety, with Shrinath-ji at the centre, and everything else invoked: season, festival, shringara, sewa, time of day, mood, event.

In some manner, much has been written on each of these themes or aspects of Pichhwais, but the feeling that not enough has been, or can be, done persists. This, because there is something in them that remains elusive, almost unknowable. For, in them, there is more than art, certainly more than craft. Faith, and the uplifting delight that comes from faith, is what resides in the greatest of them and that was the personal, intensely personal, domain of the artists who made them. At the same time, if we cannot get close to that, anything that at least leads us in that direction is something to be grateful for. That is where I found a volume, ‘conceptualised by Vikram Goyal’, which came to my notice recently — ‘Shringara of Shrinath-ji: From the Collection of the late Gokal Lal Mehta’ — of great interest. The emphasis in this sumptuously produced volume being on the shringaras of Shrinath-ji — his adornment in other words — it opens up for us a complex but exhilarating world. This is done with the help of a private collection belonging to the devoted Mehta family, members of which used to hold high office in the state of Mewar once. What Shrinath-ji prefers to wear, since he is always seen and referred to as a living person, at a particular time, or on some special occasion, is in the eyes of those who render him sewa, of great importance. What angarakha or wagha, which paag, which sarpech — sehra or katra or tipara or khup — which fatvi, or dhoti, or sutthan or moja, has to be decided as per his wishes, and the ‘sewaks,’ who have been serving him for years together, seem to know.

One cannot go into too much detail here — it is for the reader to discover — but I found the volume rich not only because it takes us to some 60 Pichhwais reproduced in full, wonderful colour, but also because they are introduced by Amit Ambalal in a rich essay: crisply written, packed with information, limned with great feeling. He leads us, sure-footedly, into this arcane world, throws a window open, and asks us to stand there and see.