Govt stops procurement of bajra, farmers up in arms : The Tribune India

Govt stops procurement of bajra, farmers up in arms 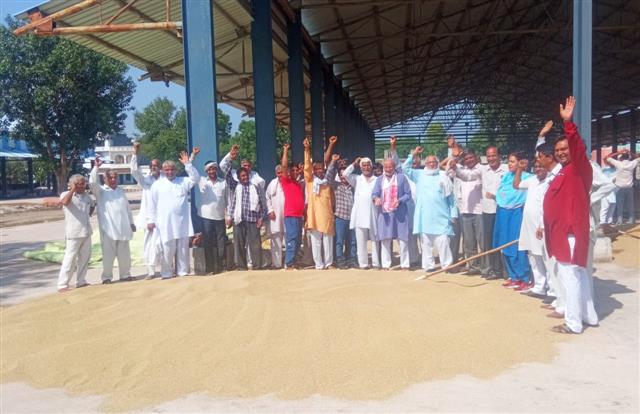 Kisan Sabha activists protest against the stoppage of government purchase of bajra at Kalanaur grain market in Rohtak district on Thursday. Tribune photo

Resentment prevails amongst farmers over the sudden stoppage of bajra procurement by the Haryana Government.

Government officials maintain that bajra crop has been brought under the Bhavantar Bharpai scheme and the farmers are being given an amount of Rs 450 per quintal to compensate for the low rates being fetched by their crop.

On the other hand, the farmers lament that they have to sell bajra to private buyers for Rs 1,700-1,800 per quintal, which is much lower than the MSP of Rs 2,350 fixed by the government.

”The purpose of the Bhavantar Bharpai scheme was to ensure that the farmers get the MSP for their produce. But the purpose has been defeated as they are not getting the MSP even after adding the amount of Rs 450 per quintal,” said Balbir Singh, president, Kisan Sabha, Haryana.

The general secretary of the sabha, Sumit Singh, pointed out that the produce of even those farmers who had got the gate passes was not being procured by the government purchase agencies.

The sabha has demanded that the government purchase of bajra be resumed and the farmers should get the MSP fixed by the government for their produce.

Devender Dhull, Secretary, Market Committee, Rohtak, admitted that the government purchase of bajra had been stopped, but purchase by private buyers was under way and the farmers were being given an amount of Rs 450 per quintal under the Bhavantar Bharpai scheme.

Anoop Nain, the District Manager of Hafed at Rohtak, stated that the procurement of bajra was stopped as per directions from the state authorities on Tuesday evening.

“The produce of the farmers who got their gate passes issued after that would not be possible,” he said.