Only Rs 4.67 crore collected in fines so far; Yamuna Monitoring Committee had last month submitted that Haryana didn’t comply with the directions of the NGT regarding compensation for not able to fix deficiencies in STPs 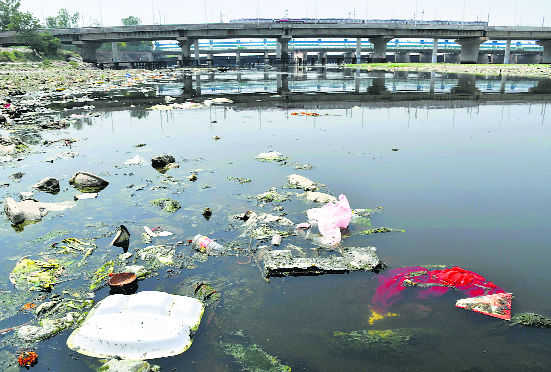 Plastic waste floats over the surface of the Yamuna river. File Photo

Haryana has claimed before the National Green Tribunal (NGT) that it has been imposing Environmental Compensation on all the violators for polluting Yamuna and till November 2020 penalties worth Rs 300 crore had been imposed on erring units.

The government though submitted that only Rs 4.67 crore had been collected so far.

In its reply, dated January 6, on the findings of Yamuna Monitoring Committee (YMC), the state has submitted that Haryana State Pollution Control Board “is also in the process of imposing EC for untreated effluent in drains/STPs, and Chief Secretary has taken up the matter with individual administrative secretaries for taking action against the erring officers”.

The YMC, in its report last month, had pointed out that Haryana didn’t comply with the September 2019 directions of the NGT regarding compensation for not able to fix deficiencies in STPs, delay in construction of new STPs and not starting works with regard to sewerage network and its connectivity.

“It will be open to Government of Haryana to recover the said amount from erring officers/contractors,” said the NGT.

The YMC in its report indicated that out of 24 STPs inspected in the Yamuna catchment towns, 16 were found to be having operational deficiencies and were not in compliance with the standards.

It was concluded that the status given by the line departments were incorrect and Haryana State Pollution Control Board officials had failed to perform their duties.

Haryana has now told the NGT that working of 10 STPs had improved and six were still non-compliant.

Regarding the observation that none of the four Common Effluent Treatment Plants (CETPs) and three STPs were working in Sonepat, the government admitted that the trunk sewer line had settled down due to which the whole sewage was not reaching two of the STPs and as a result they were not functioning up to their potential.

The work on replacement of trunk sewer line would be completed by June 30, the government said, adding that as far as the four CETPs were concerned, Haryana State Industrial and Infrastructure Development Corporation (HSIIDC) was in the process of upgrading the same.

On discharge at Sonepat, which is affecting drinking water treatment plant at Wazirpur (Delhi) due to the higher BOD (Bio-chemical Oxygen Demand) and ammoniacal nitrogen concentration, Haryana submitted that tenders had been floated for conduit to carry the effluent separately.

On no functional STP in Faridabad, it has been submitted that they are under construction.

The YMC had pointed out that construction of seven new CETPs at Faridabad, Gurugram and Yamunanagar had not started, which will lead to discharge of 131.25 MLD of industrial effluent into Yamuna.

Haryana replied that three CETPs in Faridabad would be constructed by 2023 and in Gurugram, two CETPs were getting commissioned.

Regarding industrial effluents from Yamunanagar and Jagadhri towns, the government said they were considering shifting of industrial units.