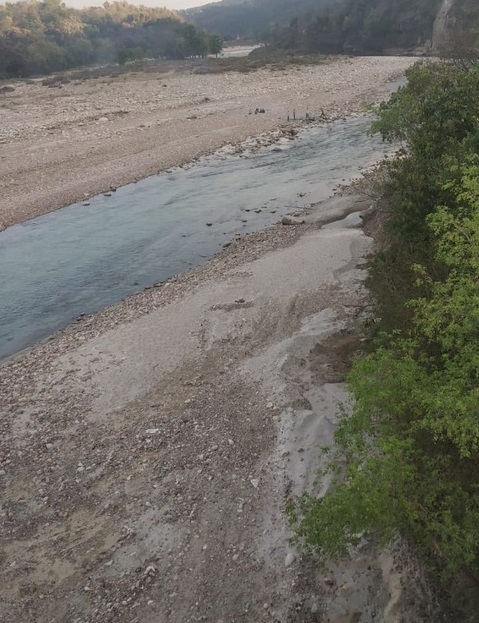 The area proposed to be alloted for mining along the Neugal river.

Residents of the Bathan panchayat (Thural) in the Sulaha constituency have decided not to issue a no-objection certificate (NOC) for the allotment of land adjoining the Neugal river for mining and setting up a stone crusher.

The government had decided to facilitate the same, subject to the issuance of NOC from the panchayat and local environmental groups.

The government had decided to allot land adjoining the Neugal river for mining and set up a stone crusher, subject to the issuance of an NOC from the panchayat and local environmental groups.

During a special meeting of the panchayat on February 23, villagers unanimously rejected the proposal, saying they would not allow environmental degradation in the area.

Bathan panchayat pradhan Seema Devi said she had called a special meeting of panchayat on February 23 to discuss the issue and seek public opinion. She said villagers unanimously rejected the proposal and said they would not allow environmental degradation in the area.

She said a year ago, the previous panchayat had also rejected the proposal under public pressure. She alleged that the mining mafia was pressuring the mining department and the Dheera SDM to get NOC from panchayat under pressure but she would not succumb to pressure.

The panchayat pardhan categorically stated that if villagers allowed mining activities, it would damage water supply schemes, bridges, roads, village paths and cremation ground, besides leading to the outbreak of various diseases.

In Jaisinghpur, where mining is underway round the clock, there had been an outbreak of pulmonary diseases and many residents were suffering from chest and lungs ailments. Even children had developed breathing troubles.

Villagers threatened to launch a mass agitation if the government tried to overrule the panchayat’s decision allegedly under the pressure of the mining mafia.