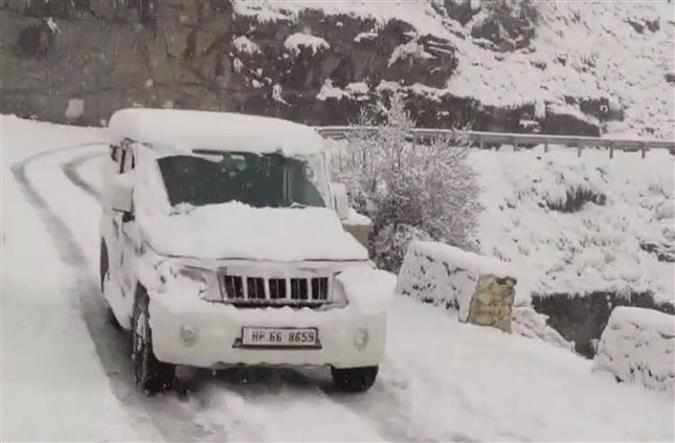 A vehicle covered with snow in Lahaul Spiti on Wednesday.

Water supply in the Lahaul valley is disrupted for the past two days due to freezing temperatures in Lahaul and Spiti district. The temperatures have plummeted drastically as it has been snowing heavily in the region since Tuesday. According to residents of Lahaul, water has freezed in supply lines. As a result, they are facing difficulties in getting potable water.

Mohan Lal Relingpa, a resident of Lahaul, said, “The people of the valley are facing difficulties in getting piped water supply in their houses due to sub-zero temperatures. People are fetching water from sources situated away their houses for use in kitchens and are melting snow for water for other domestic needs”.

After a fresh spell of snowfall since Tuesday, power supply in the Lahaul valley has been erratic. The power supply was restored to the Spiti valley today. However, the valley still remained cut off from road connectivity via the Kinnaur side for the second consecutive day due to heavy snowfall. The Lahaul valley is also cut off from road connectivity due to heavy snowfall near the Atal Tunnel and in its nearby places”.

In Kullu district, residents of Ani and Nirmand blocks are cut off from the district headquarters due to the closure of the Jalori Pass on the Aut-Luhri highway since yesterday. The district administration of Kullu has restricted the movement of tourists towards the Jalori Pass from the Banjar side and towards the Atal Tunnel beyond the Solang valley.

Meanwhile, 16 roads in Kullu district were blocked due to snowfall while four power transformers were damaged. In Mandi district, the famous tourist places of Prashar Lake, Shikari Devi and Kamrunag received heavy snowfall for the second consecutive day today, while the lower region of Mandi and Kullu districts received incessant rainfall throughout the day.