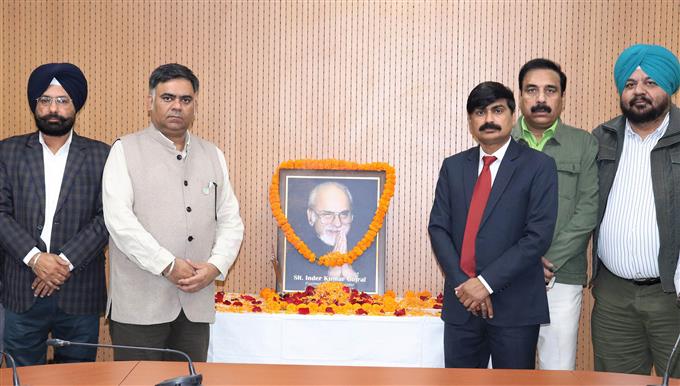 Tributes being paid to the late PM on his death anniversary.

Addressing the gathering of staff and students, Registrar IKGPTU, Dr SK Misra said, “The active participation and contribution in foreign policies and ex-PM Gujral’s work related to building good relations with foreign countries will be recalled for ages.” He shared the aspects of ‘Gujral Doctrine’ and said it was a subject of research for students even today.

In the documentation presentation prepared by Rajneesh Sharma, deputy registrar of public relations office of the university, Gujral’s role as a diplomat, a politician and a freedom fighter was depicted. Photographs and videos of his tenure as Prime Minister from April 1997 to March 1998 were shown. Born on December 4, 1919, in Jhelum district of undivided Punjab, he was shown to have had a special relation with Doaba and Majha in Punjab. Punjab also gave his family an opportunity to serve politically.

It was told in the memorial meeting that the role of his mother Pushpa Gujral as a socialist and freedom fighter was depicted. The Science City is named after her as Pushpa Gujral Science City, Kapurthala, next to university. Gujral’s contribution for Punjab, especially for Jalandhar like Doordarshan Jalandhar, Science City were highlighted.

During the commemorative meeting, the faculty, students, officers and employees under the leadership of University Registrar Dr SK Misra paid tribute to him.