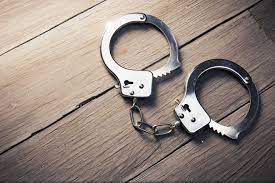 The Punjab Vigilance Bureau has arrested an absconding accused, Satish Jha, a resident of Chak Hakeem village, Phagwara, on the charge of defrauding Punjab Gramin Bank, Phagwara, by taking a loan of Rs 25 lakh on the basis of forged documents.

A spokesperson for the Vigilance Bureau (VB) said a case had already been registered in August 2020 under Sections 409, 420, 467, 468, 471 and 120-B of the IPC and Sections 13 (1) (a) (2) of the Prevention of Corruption Act at the VB police station, Jalandhar. He said the accused had got sanctioned the loan in connivance with bank manager Harbhajan Singh Kapoor and bank panel valuer Satish Kumar Sharma.

He further said there were a total of 16 accused in the case, of which six — Raj Kumar of Thatthiala Mohalla, Phagwara; Satish Kumar Sharma and Subhash Kumar residents of Mahindwani, Hoshiarpur; Avtar Singh, a resident of Asha Park Colony, Phagwara; Pankaj of Mohalla Ratanpura, Phagwara; and Rajesh Kumar of Mohalla Ratanpura — had already been arrested. The Vigilance Bureau is on a lookout for the remaining accused.

Giving more details of the case, he said during the investigation by the Vigilance, it was found that a residential colony named Bhai Ghanaiya Enclave had been built on 35 kanal 3 marlas of Chak Hakeem village in Phagwara. Sukhwinder Kaur Atwal and Maninder Kaur Atwal, who have equal ownership of 8 kanal 15 marla in the colony, had given two separate power of attorneys to Gurcharan Singh Atwal, a resident of Anokhwaal village, for the maintenance and sale of their land. He had further appointed Raj Kumar, a resident of Thatthiara Mohalla, Phagwara as power of attorney.

The spokesperson said according to Raj Kumar, during 2009-10, he was working with Avtar Singh Phagwara, then this document was registered in his name.

In the colony, about 101 marla was sold as plots and the remaining 74 marla was kept for roads and streets. This area of land was still in the revenue records listed in the name of above said Raj Kumar (Mukhtiare Khas) and its owner, Avtar Singh Phagwara. The duo with the intention of committing fraud, sold 74 marlas as small plots in the said colony. They had written the sale contracts in the names of Avtar Singh, Pradeep Kumar, Pankaj Kumar and others who later gave the written contracts in their favour to manager Harbhajan Singh Kapur and valuer Satish Kumar Sharma.

All these accused persons in connivance with the bank manager and the valuer managed to get sanctioned loans amounting to lakhs of rupees on the basis of such fards in the name of construction of new houses on the land meant for roads and streets. They also falsely mortgaged houses belonging to other people, he said.