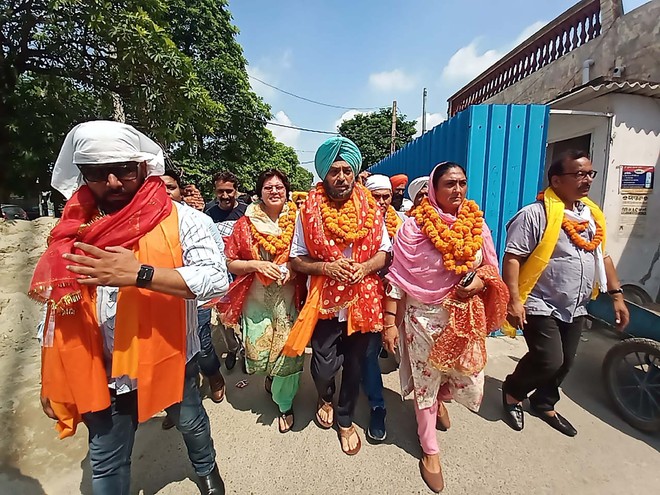 After the recent announcement of the candidatures of eight candidates of Shiromani Akali Dal for Doaba, six of Bahujan Samaj Party and Aam Aadmi Party declaring its constituency in-charges, political activity in the region has stepped up ahead of the forthcoming Assembly polls.

The SAD-BSP alliance is clearly leading as of date in terms of starting an early campaign. The AAP, too, has started following the suit especially since the announcement of ex-hockey Olympian Surinder Sodhi as the halqa in-charge and a likely candidate from Jalandhar Cantonment.

The party has been trying to create a wave by saying that it had pitted an Olympian against the sitting Congress MLA and Olympian Pargat Singh from the seat. The SAD has already announced its ex-MLA Jagbir Brar from the seat since he recently left the Congress to rejoin Akalis.

Since three candidates have already been announced from this seat, hectic activity has begun here. MLA Pargat Singh, who had earlier remained busy as the general secretary (organisation) for setting up new teams for his closest confidant and PPCC chief Navjot Sidhu, too has begun focusing back on his seat. Pargat maintains: “I now stay for four days in Jalandhar, focusing on various ongoing works, meeting people and strengthening his team. For the remaining three days of the week, I have to go to Chandigarh”.

Likewise, Brar too has been daily holding group meetings with sarpanches, block samiti members and the voters of his constituency. “The voters are not interested in the Olympian v/s Olympian fight. They want someone who will be available at their beck and call, work for development and fulfil all their needs,” says Brar.

Other than Brar, the eight candidates that the party has sent to the battlefield in Doaba include four sitting MLAs — Baldev Khera from Phillaur, Pawan Tinu from Adampur, Gurpartap Wadala from Nakodar and Dr Sukhwinder Sukhi from Banga. The party has also trusted its ex-MLAs Surinder Singh Bhullewal Rathan from Garhshankar and Sohan Singh Thandal from Chabbewal, all of whom had already been given an indication long ago about going ahead with their campaigns.

General secretary of YAD Sarabjeet Singh Sabi, who too had been nurturing political ambitions, got the Mukerian seat he had been eyeing for years. The seat was formerly with the BJP till the alliance of the two parties.

Ex-president of the Safai Mazdur Union Chandan Grewal, who got allotted the general Jalandhar Central seat as a part of Sukhbir Badal’s Valmiki appeasement theory, too has been actively working on the seat. A sort of hoarding war is going in the constituency between him and AAP halqa in-charge and ENT specialist Dr Sanjeev Sharma, who is quite confident of being a go-ahead.

The BSP, too, has its six candidates already in fray. These include party president Jasvir Garhi from Phagwara, Balwinder Kumar, who is getting repeated from Kartarpur seat, retired bank officer Anil Majinia from Jalandhar West, Lakhwinder Gilzian from Tanda, who hails from Gilzian village of executive president of PPCC and MLA Sangat S Gilzian, Mahinder Singh Kangra from Sham Churasi and Nachhatar Pal Singh from Nawanshahr.

The party is yet to decide candidates from Jalandhar North, Kapurthala and Dasuya seats. Likewise, the SAD too has been indecisive about its candidates from Sultanpur Lodhi, Shahkot and Bholath seats. The BJP, which is set to face a huge task of fielding all candidates by itself, is yet to open its cards.