After 28 years, GNDU gets the honour 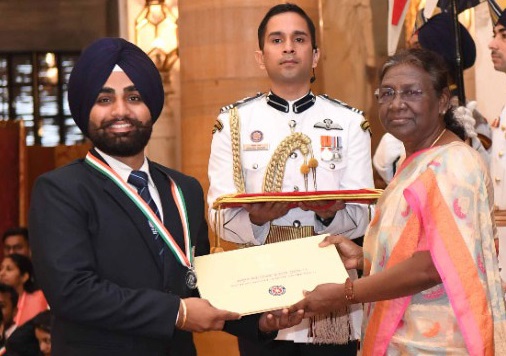 Maninderjit Singh (23), a student of post graduate diploma in computer applications (PGDCA) of Lyallpur Khalsa College, has won the National Service Scheme (NSS) Award for 2020-21 for his commendable services as an active NSS volunteer under the Union Ministry of Youth Affairs and Sports. He received the award from President Droupadi Murmu in a special ceremony organised at Rashtrapati Bhavan in New Delhi on September 24.

He was the only student from Punjab who had received this award. He was also one among the 40 volunteers selected for awards from across the country. Besides, this was for the first time in 28 years that a student of Guru Nanak Dev University or its affiliated colleges had received this honour. The last time a student of GNDU won this award was in 1994, informed Satpal Singh, chief programme officer, NSS, Lyallpur Khalsa College.

After 28 years, GNDU gets the honour

Also, this is for the first time in 28 years that a student of Guru Nanak Dev University or its affiliated colleges has received the honour

He said, the NSS, which was launched as part of Mahatma Gandhi’s birth centenary celebrations in 1969 in 37 universities with 40,000 students, primarily focused on leadership and personality development of students through community service. “Since then, the NSS has spread to nearly 396 universities, 16,331 colleges and institutions and 28,621 senior secondary schools, covering more than 38 lakh student volunteers across the country”, he added.

Speaking to Jalandhar Tribune, Maninderjit, a resident of Baupur Khurd in Shahkot, said he joined the NSS in 2019 while he was pursuing MA in political science from Lyallpur Khalsa College. He said he was then an introvert person, and his teachers motivated him to join the NSS for confidence building and personality development.

“I am completely a changed person now. I am deeply involved in social service both as a NSS volunteer and individually, exploring ‘myself’ through social service and trying to make a difference in the lives of people living in rural areas, and those who are unaware about their basic rights,” he said. Talking about the work he did as NSS volunteer in all these years, Maninderjit said he majorly worked in spreading awareness regarding sustainable environment, health and women empowerment through poster-making, rallies and campaigns. “I helped district administration officials during floods in Doaba region in 2019. I stayed in the villages then for nearly a month till the situation improved and helped village residents by arranging food for them. I cleaned the pond in my village, and made people aware about the effects of plastic on marine life”, he added.

He further said apart from planting trees, donating blood, he had actively spread awareness about how to decompose paddy with paddy decomposer, and had gone door-to-door to meet farmers to convince them not to indulge in stubble burning.

“I also visited schools to make students aware about drug addiction, AIDS, POCSO Act, and motivated them to join NSS”, he said, adding that he was also awarded the Young Warrior award by Unicef India for his services to defeat covid-19. He said as NSS has changed his vision and outlook, he now aims to work for the welfare of society, and is now preparing for the civil services exam.

Principal Lyallpur Khalsa College, Gurpinder Singh Samra said along with certificate and medal, Maninderjit was given Rs 1 lakh cash prize. He congratulated him and the college’s NSS team led by Satpal Singh for this achievement. He also encouraged other students to indulge in such social activities.