A small window to the world 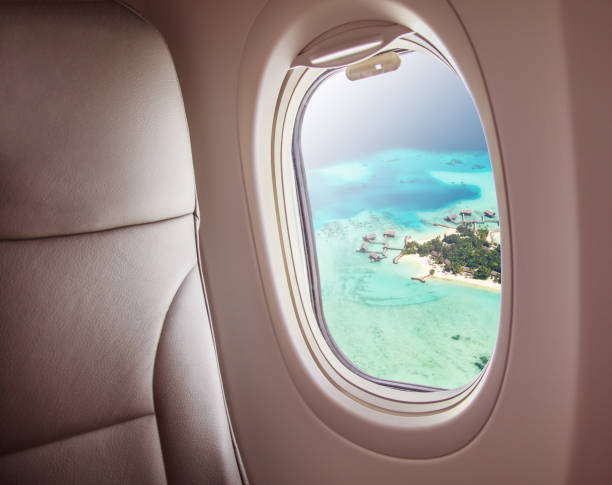 Once a passenger airplane climbs to its designated height, its window, the small porthole, presents a clear blue sky with white sheets of clouds often floating below the level of the plane.

My first trans-Atlantic flight was by Air Canada from Paris to Toronto. The window on my right presented a view of land from Newfoundland & Labrador and Quebec provinces of Canada, covered with snow, for kilometres. The super-white landscape, at daybreak, was nature at its best.

During my college days, I had seen the movie Ziddi in 1964, in which the picturisation of a song was done using the concrete model of an airplane, which is still standing in what is called the Air India Park in Santa Cruz region of Mumbai. Children love to climb its stairs, sit on its seats and look out the windows to show off, as if it were a real plane.

Window seats can offer bonanzas, at times. The captain of our plane going from Delhi to Bagdogra suddenly announced that passengers sitting on the left side can see the Mount Everest. I had a majestic view of the highest peak from my window seat.

Once, our flight from Dallas-Fort Worth to Las Vegas got delayed by over four hours. To compensate for it, the captain took a slight detour and flew over the Grand Canyon, and I was lucky to be in a right-hand side-window seat to view the grand panorama. On two occasions, I have seen the Tirupati temple from the window seat of my flights from Mumbai to Chennai. Captains of these flights usually announce the view when it is available for passengers sitting on the left side to see.

The window seat, however, kept me on edge on two flights, one from Dallas-Fort Worth to Fayetteville, and the other from Mumbai to Kolhapur. Both were turbo-prop planes, and were serviced for erratic motion by a propeller blade, just before taking off. Tense, I kept looking out of my window to check if the serviced propeller blade did rotate with adequate speed.

A memorable occasion was in 2005, when I was sitting in the business-class window seat of a Mumbai-Delhi flight, waiting for the closing of doors before take-off, and in came Sunil Dutt. Before settling into the seat right in front, he smiled and asked, ‘Oh, you too like the window seat?’ I said ‘yes’ and smiled back. It was a few months before he died. Perhaps not keeping well, he requested the air hostess not to disturb him, took a pillow and rested during the flight. After landing, he was fresh again, exchanging pleasantries with passengers. Sitting in the airport terminal bus alongside Dutt saab, I told him that Sanjay Dutt had outshone him in Munna Bhai MBBS. As a proud father, he was mighty pleased to hear that!