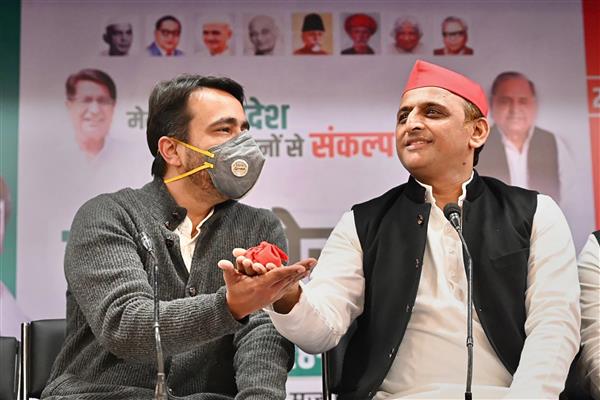 Ally Jayant Chaudhry by his side, Samajwadi Party chief Akhilesh Yadav on Friday launched a scathing attack against the ruling BJP from Muzaffarnagar in Uttar Pradesh, accusing it of deliberately delaying his helicopter in Delhi “without any reason” and calling it “losing BJP’s conspiracy and a proof of their frustration”.

Yadav and Chaudhary also denied the buzz about any post-poll alliance between the BJP and the Rashtriya Lok Dal, calling Home Minister Amit Shah’s statement “proof of desperation” in the ruling camp because of the ground situation.

“Unka nyota maan kaun raha hai…sochiye kaise halaat hain unki ki nyota dena pad raha hai. (Who is accepting their invitation…just think about their situation that they have to send such an invite,” Yadav said.

Meanwhile, terming the SP-RLD alliance “solid as a rock”, Jayant called Shah’s invite “mischievous and aimed to mislead and isolate Jats’, a politically significant vote bloc in Western UP which his party, the RLD, represents.

Yadav also claimed that “a historic SP-RLD win will wipe out the BJP in UP”.

While the buzz is that feelers, including an offer of a berth in the Centre, were sent to Chaudhary by the BJP to “consolidate Jat votes”, all of it has been denied by the RLD leader. “It is a mischievous attempt (by BJP) to create problems and confusion,” he said.

Interestingly, while Shah has been breathing fire against the SP and Mayawati-led BSP, his “soft” approach towards Chaudhary has set off a myriad of speculations.

Yadav, meanwhile, also asked farmers to be wary of the BJP, saying the Centre had withdrawn the controversial farm laws only for the sake of votes.

“The BJP promised to double the income of farmers but it brought the three anti-farmer laws. The farmers forced the government to repeal the laws. The BJP rolled back the laws for the sake of votes,” the SP chief said.

Jats are a deciding factor in almost all seats in western UP, the region where the RLD enjoys influence among the community. The SP and the RLD are trying to revive MAJGAR, the caste combination of Muslim, Ahir (Yadav), Jat, Gujjar and Rajput, which suffered a major dent following the 2013-Muzaffarnagar violence.

Yadav said the SP-RLD alliance was headed for a historic win and the BJP was using every possible ploy to divert attention from real issues. “We are sons of farmers and have joined hands to save the legacy of Chaudhary Charan Singh. We would lay our lives for the cause of farmers and save the Ganga-Jamuni tehzeeb of the region,” said Yadav, taking a pledge over food grains with Chaudhary. “Those who are talking of palayan (exodus) we will ensure their political exodus from UP in March,” he said.