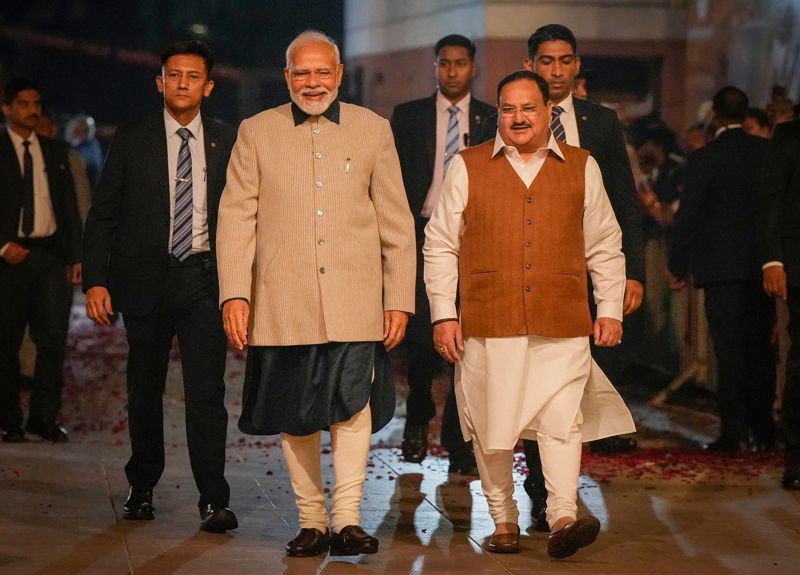 The ruling BJP on Thursday swept Gujarat in a historic seventh straight win, with the Opposition Congress hitting rock bottom and AAP securing enough votes to dent the grand old party and managing a national outfit tag for itself.

Thank you, Gujarat! I am overcome with a lot of emotions seeing the phenomenal poll results. People blessed the politics of development... they want this momentum to continue. I bow to ‘jan shakti’. —Narendra Modi, PM

Winning 156 seats in an Assembly of 182, where 92 is the simple majority mark, the BJP secured an over four-fifth majority, in an unrivalled feat. With today’s verdict, the BJP broke the Congress’ 1985 record of 149 seats set under the late CM Madhavsinh Solanki and surpassed its own 2002 record of 127 seats under then CM Narendra Modi. 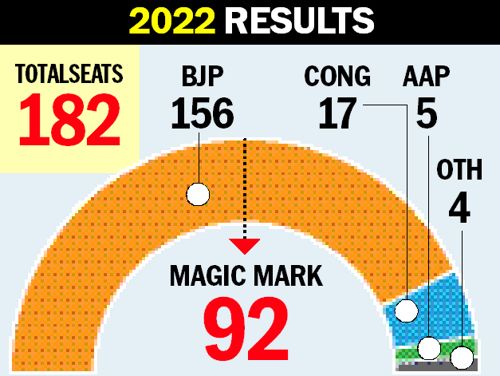 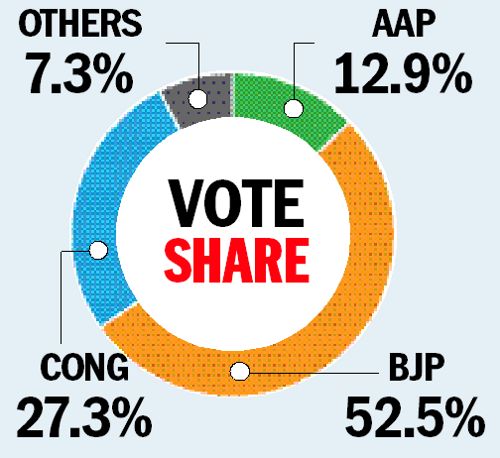 An overwhelmed Prime Minister Modi tweeted, “Thank you, Gujarat! I am overcome with a lot of emotions seeing the phenomenal election results. People blessed the politics of development and at the same time expressed a desire that they want this momentum to continue at a greater pace. I bow to Gujarat’s ‘jan shakti’ (people’s power).” The Congress, contrastingly, ended at a historic low tally of 17 seats, its worst ever. The party’s last poorest show was 33 seats in 1990. AAP won only five seats even as it had fielded 181 candidates. Its CM candidate Isudan Gadhvi and state chief Gopal Italia both lost.

The results mirrored PM’s expectations as he had appealed to voters of the home state to help “Bhupendra break Narendra’s record”. CM Bhupendra Patel today won Ghatlodia seat in Ahmedabad with the highest margin of 1,92,263 in the state. Gujarat MoS (Home) Harsh Sanghvi won with the second highest margin of 1,16,675.

The BJP also secured its highest ever vote share of 52.51 per cent in Gujarat today, pocketing seats across all segments—rural and urban and transcending caste and class barriers that had stalled its rise in 2017, when the Congress-powered Patidar agitation dented its win.

The Hardik Patel-led movement had restricted the BJP to 99 seats, its lowest since 1990 when the party had won 67. But today, the saffron party reversed the 2017 trends, sweeping Saurashtra-Kutch it had ceded to the Congress that won 77 seats in 2017, its best since 1990.

Further, the BJP today also won seats it had never won before. Party’s Christian candidate Mohan Konkani bagged Vyara, a tribal seat that the Congress had been winning for four consecutive terms. In Jhagadia, another ST reserved seat, the BJP candidate defeated seven-time MLA Chhotubhai Vasava by 23,500 votes. The same pattern persisted across most of the 27 reserved ST segments in Surat, Tapi and Bharuch, with the BJP winning 24. In 2017, the party had won only eight of the reserved ST seats against 15 of the Congress.

BJP president JP Nadda said, “Gujarat has set new records of development in the last two decades under the leadership of Modi ji and today, the people of Gujarat have blessed the BJP.” He, however, did not tweet on Himachal, his home state, where the BJP failed to buck the anti-incumbency trend that has held since 1985.

Today’s verdict spelt doom for the Congress, as the party stood decimated, managing a vote share of barely 27.25%. This is the first time that the Congress vote share in Gujarat has fallen below 30%. Even in the worst of times, the party had managed to poll over 30% of the votes.