I'm proud to be an Indian Muslim: Ghulam Nabi Azad 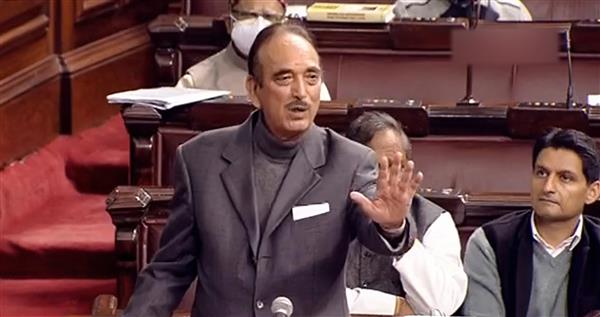 Leader of Opposition in the Rajya Sabha and senior Congress politician Ghulam Nabi Azad, whose Rajya Sabha term is ending this month, on Tuesday said that "I am a proud Indian Muslim. Muslims should be proud of this country but the majority community should take steps forward towards the minority."

Azad said, "I never visited Pakistan but I know the problems and circumstances in that country and I hope those problems do not come to haunt the Muslims of India and after seeing the fate of Muslims in many countries I feel proud of being a Hindustani Muslim." He said, "I have been in Parliament and state assembly for 41 years and got a chance to work with Indira Gandhi, Rajiv Gandhi, Sonia Gandhi and Rahul Gandhi as party Presidents." He said the Congress gave him a chance to interact with many big leaders, including Jyoti Basu.

The retiring Rajya Sabha members from Jammu & Kashmir urged the house that issues of J&K should be considered and statehood should be restored soon for the benefit of the people of the state.

Azad thanked Prime Minister Narendra Modi for his kind words and also said that he first cried when Sanjay Gandhi, then Indira Gandhi and later Rajiv Gandhi all died unnatural deaths and he also wept after a cyclone in Odisha.

Prime Minister Modi also got emotional while bidding farewell to Azad and saluted him in the Rajya Sabha. Azad is one among four members retiring from the Upper House this month.

The Prime Minister, while referring to Azad's contribution to politics and the House, said: "You are retiring from the House, but I will not let you retire and my doors are open for you and I will need your contribution and advice." Modi said the person who will replace Azad will have a tough task to match his contributions. "He is concerned about his party but more about the House and the country," said Modi.

Modi also recalled his relations with the Congress leader when he was the Chief Minister of Gujarat. Modi said, "When there was an attack on Gujarati tourists in Kashmir, Azad was the first to inform me and was almost crying." Azad during his speech was also emotional while mentioning the incident and said that he prays that militancy is finished in the country.

Rajya Sabha Chairman M. Venkaiah Naidu too said that Azad was retiring from the House but not from public service and he hoped that "he gets re-elected soon to the House." Speaking on the occasion, NCP chief Sharad Pawar said that Azad was the most experienced leader of the country and handled so many ministries. He also said that Azad raised the profile of the the Leader of Opposition in the House.

"When he was the parliamentary affairs minister he had good relations with the opposition and all other political parties," said Pawar.