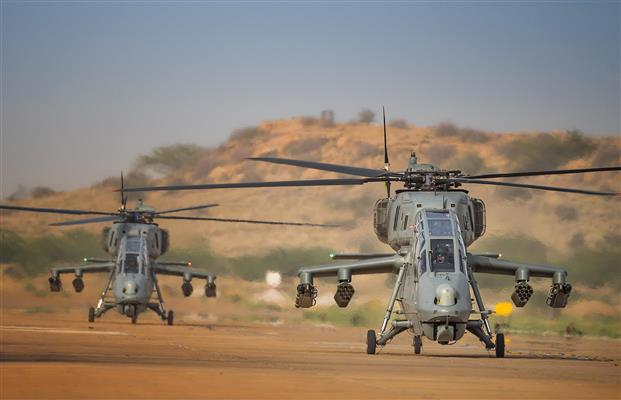 The first unit of indigenously made light combat helicopters (LCH) is all set to join the IAF fleet on October 3. Ten LCHs will be inducted in the first batch.

The first unit of indigenously made light combat helicopters (LCH) is all set to join the IAF fleet on October 3. Ten LCHs will be inducted in the first batch.

The helicopters, with the ability to carry out night warfare, will carry latest weapons, avionics and radars.

Powered by two Turbomeca Shakti engines, the copter has a service ceiling of 6,500 metres (21,000 feet), it can go over the highest of the Himalayan passes. The 5.8-tonne helicopter will carry a turret gun, a rocket firing system and air-to-air missiles.

The copter has built-in crashworthiness of landing gear, crew seats and fuel tanks. It will carry an onboard electronic warfare.

The rotor blades have advanced technology carbon fibre. Pilots will have modern avionics to work with.

The IAF operates the three-decade-old Russian Mi-25 and Mi-35 attack helicopters. One of the squadrons of the Russian-made copters is to be phased out while another one is going for a midlife upgrade. The process of induction of 22 Boeing AH-64E Apache attack helicopters has been completed.

In March, the Cabinet Committee on Security had approved procurement of 15 Limited Series Production variants of the LCH at the cost of Rs 3,887 crore along with infrastructure sanctions worth Rs 377 crore.