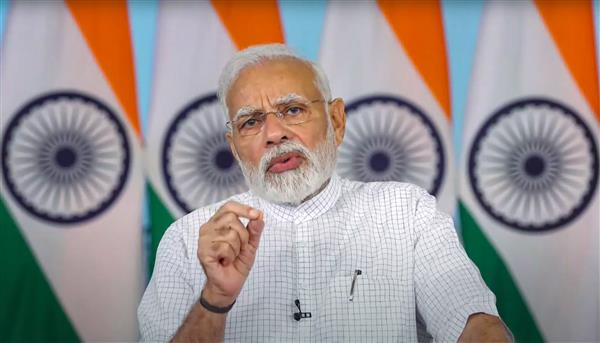 Prime Minister Narendra Modi has alleged that “urban Naxals and anti-development elements”, having political backing, stalled the construction of Sardar Sarovar Dam on the Narmada in Gujarat for many years by running a campaign claiming that it would harm the environment.

More than 6,000 proposals for environmental clearance and 6,500 applications for forest clearance are lying with the states. Efforts should be made by the states to clear every proper proposal soon. Narendra Modi, PM

“Urban Naxals and anti-development elements — having political backing — had stalled the construction of the Sardar Sarovar Dam by running a campaign that the project would harm the environment. Huge amount of money was wasted due to this delay. Now, when the dam is complete, you can very well judge how dubious their claims were,” he said.

Recently, Chief Minister Bhupendra Patel of poll-bound Gujarat had also alleged “urban Naxals” had opposed the dam to deprive the state and arid Kutch region of water and development, labelling activist and Narmada Bachao Andolan leader Medha Patkar, whose name is also doing the rounds as the CM candidate of AAP, as an “urban Naxal”.

Calling for clearing pendency, the PM said more than 6,000 proposals for environmental clearance and 6,500 applications for forest clearance are lying with the states. “Efforts should be made by the states to clear every proper proposal soon. You can guess that due to this pendency, projects worth thousands of crores of rupees will be stuck,” he added.

“Where environment clearance used to take more than 600 days eight years ago, it takes 75 days today,” he added. “In giving environmental clearance, we also take care of the rules and give priority to the development of the people of that area. It is a win-win situation for both the economy and ecology.”