Legend has it that travellers and traders, who used to come to the city, stayed at the serai for night | Today, the sarai is the office of CIA staff of the Patiala police where criminals are kept 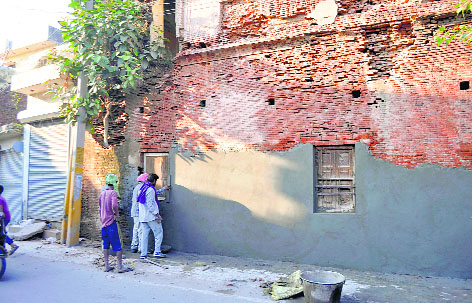 The Police Department has carried out renovation work of Maiji di Serai, an 18th century heritage building in the city. “The new brick and plaster work has been carried out from funds received from the state government,” confirmed officials of the department.

The information about condition of various buildings in the city, which were in dilapidated condition, was provided in these columns recently.

The Maiji di Serai, a haveli, is a heritage building, which was constructed in the city in the late 18th century. Legend has it that travellers and traders, who used to come to the city, stayed at the serai for night. Today, the sarai is the office of CIA staff of the Patiala police, which uses its premises to keep criminals and interrogate them.

When contacted, officials said the Police Department had received funds from the state government for the renovation and other works at various police stations. “The work has been carried out from these funds,” officials added.

The office had also renovated the outer wall of the serai, which was primarily built with small sized bricks.

The Patiala SSP, Sandeep Garg, said, “Minor renovation work has been carried out at the building keeping in mind security concerns as some part of the wall was damaged. We are ensuring that no changes are made to the basic structure of the building.”

Meanwhile, the PWD, along with the Municipal Corporation, is preparing a report on the current status of such buildings in the city.