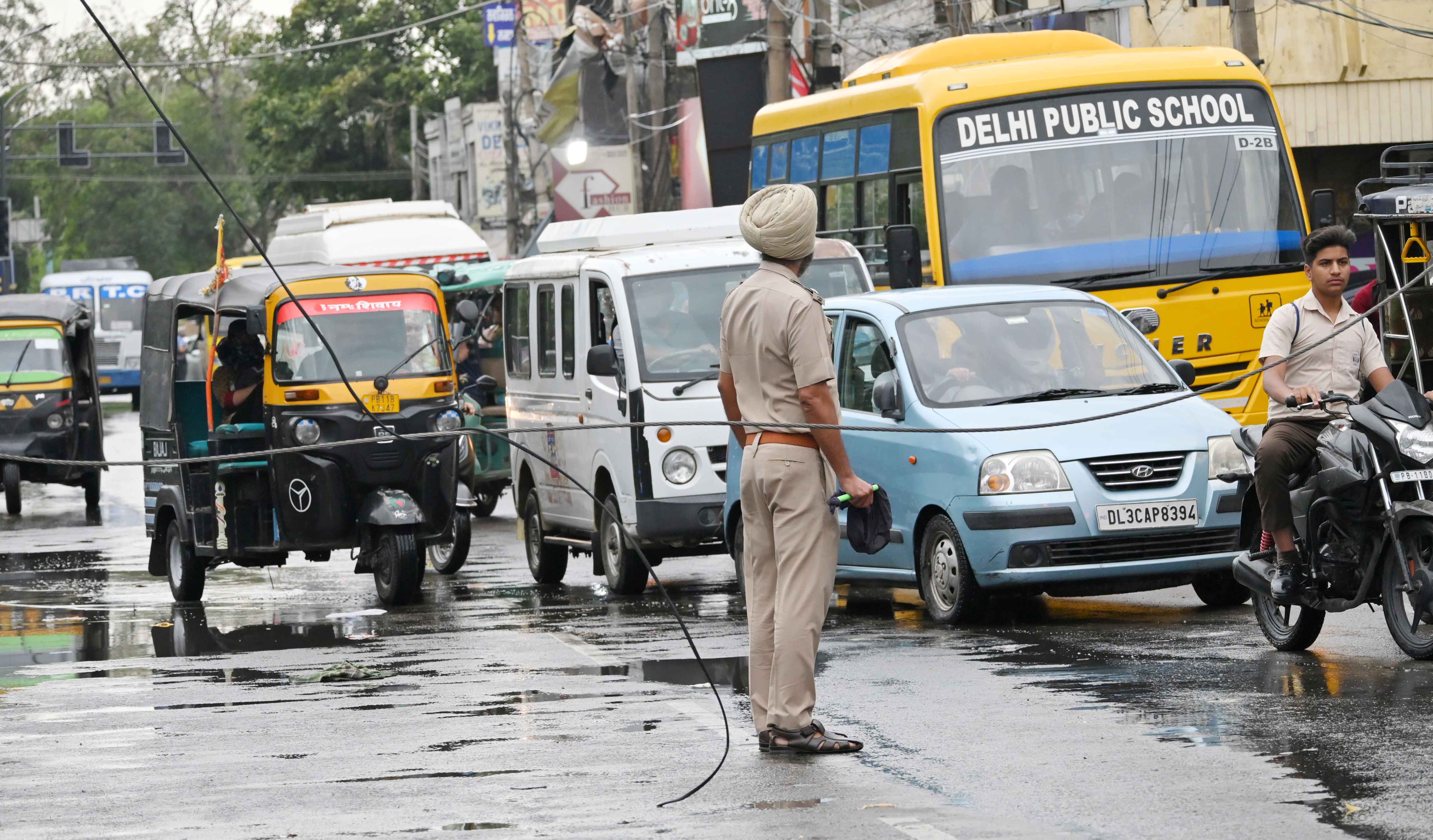 A cop stands guard to control traffic near broken electricity wires after rain in Patiala on Monday. Photo: Rajesh Sachar

Gusty winds, thunderstorm accompanied by rainfall lashed the city yesterday night and late today evening. The region witnessed strong winds at a speed of 40-50 km per hour. While the temperature witnessed a drastic drop, electricity poles and trees in the city were also damaged. Residents complained of faults in water and electricity supply in the city.

The Meteorological Department had predicted thunderstorms and lightning during the ongoing pre-monsoon season. Similar conditions are expected in the region on Tuesday and Wednesday as well, it said.

The district received 17.6 mm rainfall. Electricity poles and wires were damaged at the Model Town area, Sirhind Road, near Gurdwara Dukhniwaran Sahib, while trees were found damaged at the Baradari Garden, Nabha Road and other areas. A tree fell onto the road and blocked traffic in the Ghanaur area. Area MLA Gurlal Ghanaur was seen walking around in the downpour getting the fallen tree removed to clear the way for traffic.

Damage to electricity poles resulted in snapped power supply in various areas adjoining Police Lines, Gurdwara Dukhniwaran Sahib in the city and rural parts of the district on Monday.

Areas near Police Lines, Tripuri, and near the Omaxe mall on the Mall Road witnessed water-logging till early this morning. Commuters faced difficulties in reaching destinations at right time. Residents claimed, “Electricity poles were damaged near Gurdwara Dukhniwaran. It left early morning school and office-goers haggard. School buses had to take alternative routes to reach their destinations.”

An official communication from the IMD on Monday evening said western disturbance due to a cyclonic circulation over north Pakistan extended up to middle tropospheric levels. “An induced low pressure area lies over northwest Rajasthan and an east-west trough runs from this induced low pressure area to north Bangladesh in lower tropospheric levels leading to fairly widespread rainfall activity over Punjab, Haryana along with isolated thunder squall (50-60 kmph) very likely over Punjab, Haryana and Chandigarh today,” the IMD said.

The IMD today evening said light to moderate rain with thunderstorm and gusty wind are expected to continue over Ferozepur, Fazilka, Muktsar, Moga, Faridkot, Ludhiana and other areas while hail is likely over parts of Sangrur and Patiala late Monday evening.

It expects a fall in overall maximum temperature by 3 to 4 degree Celsius along with wind speed of 30 to 40 kmph over the next few days till May 25.