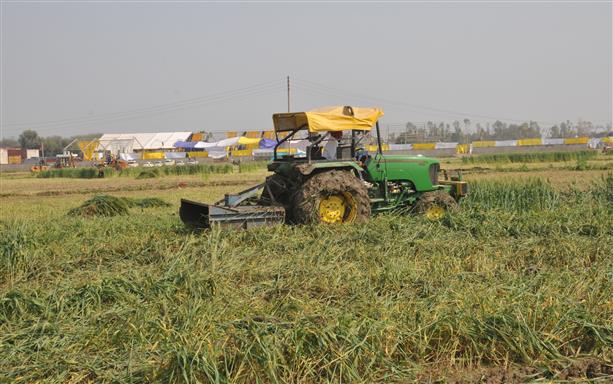 Crops being razed at Khatkar Kalan on Monday. Malkiat Singh

Standing crop across 150 acres has been razed and parts of the boundary walls of the Shaheed-e-Azam Bhagat Singh Martyrs’ Memorial and Museum broken to accommodate a huge gathering at Khatkar Kalan village for the swearing-in ceremony of CM-designate Bhagwant Mann on March 16.

A huge pandal in ‘basanti’ (yellow) and blue drapes is coming up at Khatkar Kalan. Yellow is the traditional colour of AAP’s adopted turban, styled after martyr Bhagat Singh. Blue is the colour of Dr BR Ambedkar — revered by Dalits.

From the initial plan of accommodating 1 lakh people, the expected number had swelled to around 2 lakh till yesterday. However, with CM-designate Bhagwant Mann’s open invitation to people last evening, the turnout is likely to go up significantly, and officials are not taking any chances. Officials and bureaucrats in large numbers have been making a beeline for Khatkar Kalan to review the arrangements on a daily basis.

The area of the pandal and parking space have been extended gradually. From 13 acres earlier, it was stretched to 40 to 50 acres and now 150 acres have been cleared of standing wheat crop to prepare for the mega event.

A compensation of Rs 45,000 per acre has been promised to at least 20 farmers whose 150 acres have been cleared of crop for parking at Khatkar Kalan. Residents said: “We are happy with the change of guard. And farmers have been promised compensation in return for their crop. So they don’t have any qualms about the land being used.”

Officials said since it was a mega event with historic significance, the entire nation would be looking towards the state, so every officer was duty-bound to make it a success. They said minute details were being looked into and arrangements for parking, food and water for public, stage, power supply, sanitation, health, law and order, security were being reviewed.