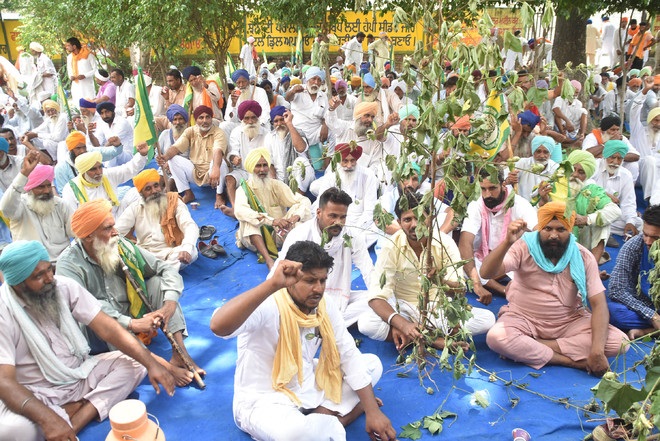 Citing delay in providing compensation for cotton crop, which got damaged due to the pink bollworm attack last year, scores of farmers under the banner of the BKU (Ekta Ugrahan) gheraoed Mansa district administrative complex on Thursday.

Chandigarh: The Sanyukt Samaj Morcha (SSM) held a meeting in Chandigarh today. Balbir Singh Rajewal gave a call to farmers to prepare for struggle over pending issues. Rajewal accused the Centre of dilly-dallying on the demands it accept on December 9 last year. The kisan leaders decided to extend full support to the two-day strike (March 28-29) called by various trade unions. Meanwhile, BKU (Qadian) issued a statement saying that they were not a part of this meeting. Veerpal Singh of the union said no one from their body was present in this meeting. TNS

The protesting farmers raised slogans against the district administration and blocked the road, thus disrupting the movement of people going in and out of the DC office.

Farm leaders said as the administration has failed to provide compensation to the affected farmers despite repeated requests, they would now launch an indefinite stir. Farm labourers in large numbers also participated in the protest.

Ram Singh Bhaini Bagha, district chief, BKU (Ekta Ugrahan), said, “Due to spurious seeds and pesticides our cotton crop came under the pink bollworm attack. It points towards gross failure on the part of the previous state government. We have been holding agitations for a long time to seek compensation, but the officials concerned have been ignoring our demand.”

“We sat on a dharna outside house of former finance minister Manpreet Badal for 15 days. The Channi government had assured us a compensation of Rs 17,000 per acre. Farm labourers were also promised to be adequately compensated for losing out on work, but the promise never materliased. Where compensation was provided, many affected farmers were left out,” said Bagha.

Farmers said until the administration provides them compensation, they would continue with their stir.