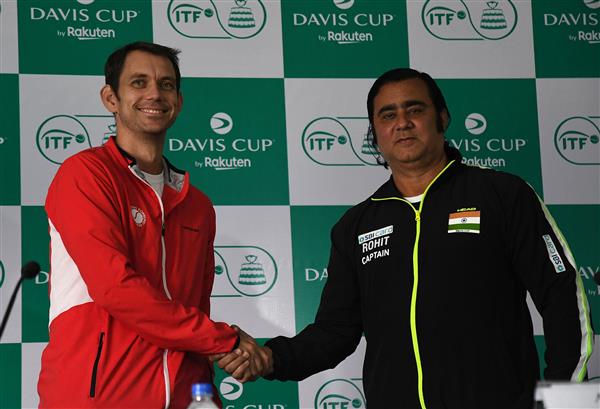 Denmark’s Davis Cup captain  put up a brave front, saying his team would give its best to upset India in the World Group Playoff I tie in New Delhi starting Friday. Nielsen, speaking to the media a day before the draw, conceded that India had the home advantage.

“I think time will tell whether it would be advantageous to us. It is old-school grass in the sense that it plays very fast with the serve so not good for rallies and it will add a little bit of randomness to the proceedings,” Nielsen said.

“But obviously India has picked these conditions because they think they have the biggest chance to win. And you would think that the advantage is with India but I like our chances and we will try to win because we are not here to make up the numbers. I have a lot of faith in my boys. I don’t think this will be the biggest upset in the Davis Cup but we need to cause an upset to win this tie,” the 38-year-old doubles specialist added.

Nielsen further said that though his team will miss its highest ranked player, world No. 90 Holger Rune, it will be very competitive.

“We still have Mikael Torpegaard (ranked 210), who is more experienced and has been playing at a high level over the last few years. Then we have young players, including two college guys who captain their teams. We can lean on all the guys besides I can play as well. I will be ready to play,” he said.

‘We will decide tonight’

India’s non-playing captain Rohit Rajpal said they were yet to decide who from Yuki Bhambri, Prajnesh Gunneswaran and Ramkumar Ramnathan will play in the two singles matches on the first day.

“We are still contemplating (the team composition). The think tank will be meeting tonight to select the team. Two of the three will be there tomorrow,” Rajpal said.

The situation is clearer for the doubles composition. Seasoned campaigner Rohan Bopanna will in all likelihood be paired with Ramkumar.

Denmark’s Davis Cup captain Frederik Nielsen said he felt sad for the people who were involved in the conflict between Russia and Ukraine. “I am baffled that it can happen in these times. We are supposedly enlightened and our best solution to conflict is to go into other countries and start killing innocent people. I am very much pro peace and hope for a solution very soon,” Nielsen said.