Oz come out on top in 7-goal thriller, Belgium keep it simple : The Tribune India

Oz come out on top in 7-goal thriller, Belgium keep it simple 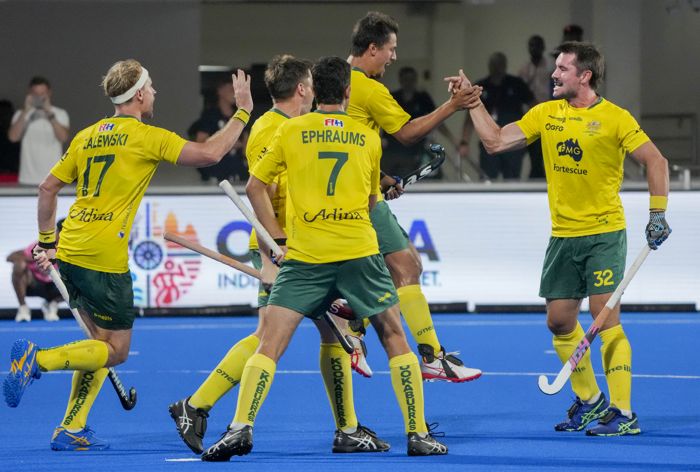 World No. 1 Australia and defending champions Belgium entered the semifinals after two very different kinds of wins in the quarterfinals of the World Cup here today.

While Australia had to fight back from being 0-2 down to beat Spain 4-3, Belgium looked in complete control in their 2-0 victory against New Zealand.

In fact, the Red Lions’ win was a lesson for the Indian side, who were stunned by the Kiwis in the crossovers, on how to kill a match after taking a two-goal lead.

Belgium justified their favourites tag with a breathtaking display of team understanding. The intricacies of their moves, with passes flowing freely, would keep their last-4 opposition (yet to be decided) up all night.

What stood out even more, from an Indian perspective, was that they did not let the setback of losing their star drag-flicker Alexander Hendrickx due to an injury before the match affect their composure. Old horse Tom Boon stepped up and converted their first penalty corner in the 10th minute. Florent van Aubel made it 2-0 five minutes later. With a two-goal cushion, Belgium did not feel the need to exert much. They had way too much experience for New Zealand to trouble them.

The Kiwis gave it their all but did not have the luck that got them past India.

While they had converted their only penalty corner against India, they wasted three today. They also had deflections going marginally wide. Overall, though, they were no match for the Belgians.

Australia had to dig deep to overcome the guile of Max Caldas and the determination of his players to get to the World Cup semifinals for the 11th consecutive time.

Australia made a contained start, looking to chip away at the Spanish defence with patient build-up play. They were successful in earning early penalty corners – three in the first quarter – but could not convert. Spain defended well to deny Australia open chances. Spain then scored against the run of play, as they so often do. Two goals – from Xavier Gispert (19th minute) and Marc Recasens (23rd) – within four minutes stunned the Australian camp.

But Australia, true to their never-say-die spirit, hit back before halftime, Flynn Ogilvie scoring in the 29th minute. They carried on with their all-out attack after the break and found the equaliser within a minute through captain Aran Zalewski’s lunging effort.

With their tails up, Australia struck twice within five minutes through Jeremy Hayward’s (32nd, 36th) penalty corner goals. It was as if Spain had poked the hornet’s nest and were struggling to survive. But a disallowed Australian goal after a review stemmed the flow and Marc Miralles’ penalty corner strike in the 40th minute restored Spain’s belief. The final quarter became a battle of wit and grit – Australia had to balance their quest for another goal with their need to not concede, while Spain had to mix urgency with calmness to get the equaliser.

Spain got a golden opportunity to take the game to the shootout but Miralles’ penalty stroke was brilliantly saved by Andrew Charter in the 55th minute.