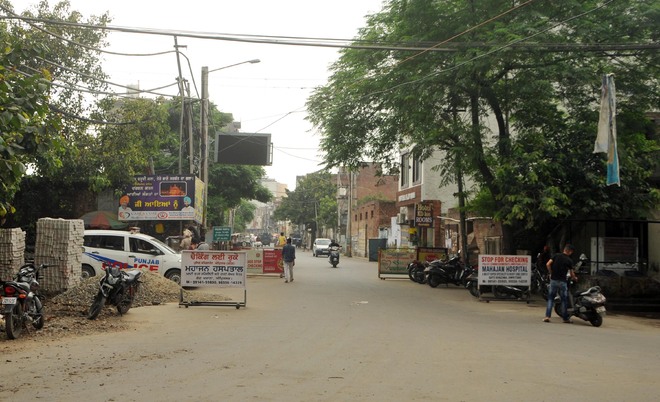 The entrance of Gheo Mandi where the Ahluwalia Gate is to be constructed. Tribune photo: Vishal Kumar

Even 17 years after laying the foundation stone of the reconstruction of the Ahluwalia Gate at Gheo Mandi entrance of the walled city, the government has failed to execute the plan till date. Then Congress MLAs Jugal Kishore and Harjinder Singh Thekedar had laid the foundation stone on November 19, 2003.

The Municipal Corporation passed a unanimous resolution for the construction of the gate on January 17, 2003.

The gate was demolished by Britishers after the annexation of Punjab in 1849. The Sikh heritage of the city was vandalised by the Britishers and re-constructed some of the gates with colonial architecture in 1860s. Most of these sites were named after English administrators.

A number of historical documents including maps of the Municipal Committee, Amritsar, depict 12 historical gates, including Darwaza Ramgarhia and Darwaza Ahluwalia. On the basis of these old maps of Amritsar Corporation (1849 and 1947) mentioned Dr Anand Gabha, in her book “Amritsar: A study in Urban History, two associations including Sardar Jassa Singh Ramgarhia Federation and Sultan-ul-Quam Sardar Jassa Singh Ahluwalia Memorial Society initiated the activism to reconstruct the gates around 20 years back.

Onkar Singh Sandhu, patron of the Sardar Jassa Singh Ramgarhia Federation made efforts and constructed the Ramgharia Gate with the help of Ramgarhia community in 2014.

Pardeep Singh Walia, president of Sultan-ul-Quam Sardar Jassa Singh Ahluwalia Memorial Society said, “The Municipal Corporation has passed the proposal and two MLAs laid the foundation stone. But the construction work never started. The centre and the state government spending crores on the heritage and beautification projects of the walled city but did not construct one of the most important gate, demolished by Britishers. I have all the record about the existence of gate but no one wanted to hear us”.

Micheal Raul, an activist working for the heritage building, said, “Sardar Jassa Singh Ahluwalia had a great contribution to the city and its dwellers. He protected the city from invaders by constructing military posts around. The historical record established that Darwaja was demolished after annexation of Punjab. It should be reconstructed to pay tribute to Sardar Jassa Singh. It will also helpful for the tourism in the city.”