Amritsar Municipal waste overflowing in fields adds to their woes 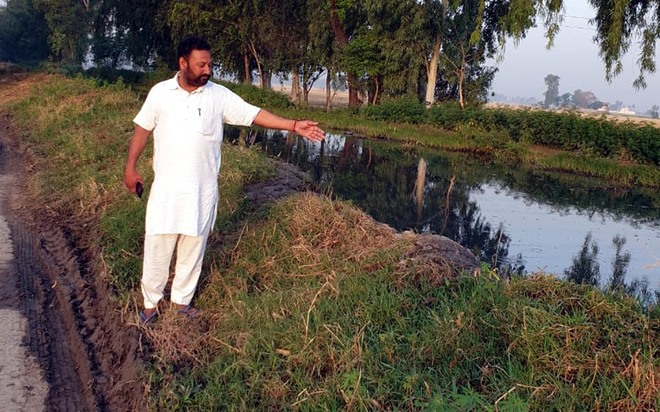 Thirty years, seven protests and a question in state Assembly later, the farmers of 22 villages surrounding Khasa are still requesting Amritsar Municipal Corporation to stop throwing municipal waste in the canal distributary meant to supply water for irrigation. However, this year, they are even more troubled as the overflowing water from the channel has flooded their fields. “Some of the fields are yet to be harvested,” said an area resident.

A farmer activist and leader of Border Area Sangarsh Committee, Rattan Singh Randhawa, said: “In the past few years, we have organised seven massive protests and given countless memorandums to officials concerned, but we have failed to move them.” The problem could be easily solved by laying a pipeline for the municipal waste so that the irrigation channel could provide water to fields, he added.

The Municipal Corporation is throwing municipal waste in the water distributary which is around 32 km in length and is officially known as Chhehharta distributary. The problem with the water channel begins at ‘burji’ No. 52 near Gumanpura where the waste water enters the channel.

While the governments and agriculture experts often worry about depleting water table, the farmers in the area are forced to draw underground water as the canal water is unusable. “The silt depositing at the base of the water channel has raised its level. None of the government departments have even bothered to remove the silt. Now, as the level of channel is higher than the level of fields, the chemical water often enters fields,” said another farmer.

Sub Divisional Officer Irrigation, Rajesh Gupta, said: “We would again take up the matter with the higher ups and the municipal corporation.” He said the Irrigation Department has taken up the matter with the MC on various occasions, but as the matter is between two government departments, the problem still persists. “We would also initiate efforts to remove the silt,” said Gupta, adding that farmers had recently too approached him with the problem.