4 brought on production warrant from Gurdaspur 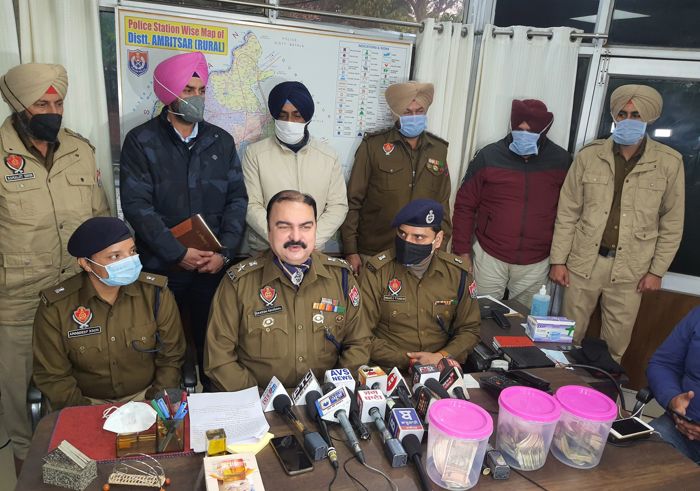 With the arrest of five persons, the Amritsar rural police have cracked the Rs22-lakh robbery case and out of the total amount, the police have recovered Rs16.57 lakh.

Following an initial probe, the police have arrested Harwinder Singh Kala, driver of the victim, and his interrogation has led to the identification of the remaining suspects, who were arrested by the Gurdaspur police in an operation.

They were later arrested after bringing them on production warrant. They were identified as Gurwinder Singh, alias Sethi, of Bhullar village; Nirmal Singh Nimma of Kotli Surat Mallian village; Sukhpreet Singh of Waraich village and Amarjjit Singh or Amru of Bhullar village.

SSP Rakesh Kaushal said as per the probe, Rs20 lakh was looted from the victims. The driver Harwinder Singh had connived with the remaining suspects. He said Rs3 lakh was recovered from the car. The arrest of the remaining accused led to the recovery of Rs10.57 lakh and the car used in the crime was also seized.

“The police managed to seize Rs3 lakh more after their interrogation. Till now, the police have recovered total Rs16.57 lakh,” he said, adding that one of their accomplice was yet to be arrested. His arrest would help in recovering the remaining amount, he said.

Three unidentified armed persons had allegedly robbed Rs22 lakh at gunpoint from an iron trader at Buttar village under Mehta police on December 25. Complainant Ravinder Singh and his partner Lakhwinder Singh, both residents of Batala, said they were going to Jalandhar to buy a school bus in their car. When they reached near Buttar, another car stopped ahead of their car and three occupants came out. He said they pointed a pistol at them and asked them to come out. He said they got afraid and came out. He said the accused took the bag containing the money and fled.