Victim was a resident of Gali Jassa Singh near Golden Temple 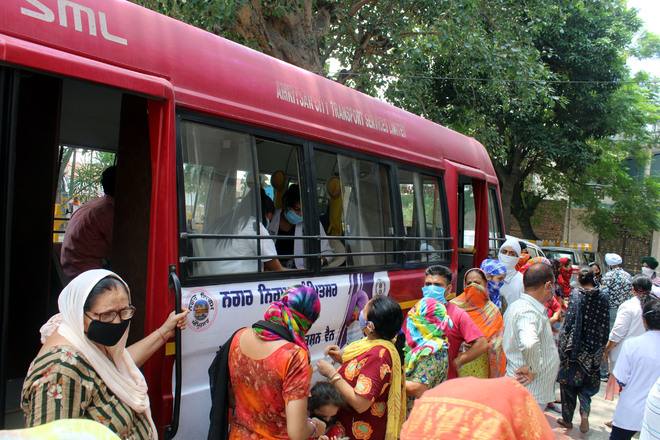 Residents stand in a queue outside a mobile Covid testing lab in Amritsar. Tribune photo

With the health authorities reported another death due to Covid-19 on Monday, the death toll has increased to 48 in the district. The district also reported 12 fresh Covid-19 cases, taking the number of positive patients to 1,015 in the district.

The deceased has been identified as Jagan Nath, a 42-year-old resident of Gali Jassa Singh near the Golden Temple. The patient, who suffered from liver abscess, was under treatment at Government Medical College.

The district health bulletin stated that of the new cases, nine were ILI (influenza-like illness) cases and three were contacts of positive patients. One ILI case each was reported from Bhushanpura, Shivala Colony, Guru Nanak Nagar, Nawan Kot, Kirpa Nagar (Narayangarh), Sandhu Colony, Mustafabad, Daimganj and Vijay Nagar. Besides, one contact case each was reported from Shahid Udham Singh Nagar, Shivala Colony and Garden Enclave. So far, 823 patients have recovered from the disease and at present 144 active cases are admitted in hospitals.

Meanwhile, Civil Surgeon Dr Navdeep Singh said the mobile sample collecting vehicle was being sent to affected areas to collect samples. A total of 52 samples were collected from the micro-containment zone on the Lawrence Road. He added that the mobile vehicle was helping in containing the spread as suspected patients were not required to move out from their areas to reach hospitals.