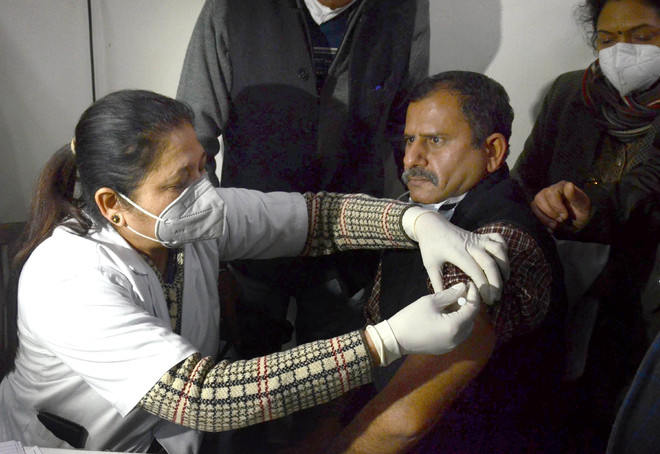 A health worker gets the first dose of the Covishield vaccine at the Civil Hospital, Amritsar, on Saturday. Photo: Sunil Kumar

The Health Department on Saturday launched the Covid vaccination programme in the district with Rajesh Sharma, a lab technician of the Jallianwala Bagh Martyrs Memorial Civil Hospital, becoming the first person to get the Covid-19 vaccine.

Apart from the Civil Hospital, the vaccination drive was simultaneously conducted at Government Medical College and the Community Health Centre (CHC) at Verka. The district health authorities reported that a total of 78 employees were vaccinated.

Though the vaccination drive has started, health workers are showing hesitation because of the controversies surrounding the efficacy of the vaccines and side-effects. The department had asked the employees to voluntarily come forward to get vaccinated but most did not respond. The employees suggested that Cabinet ministers, MLAs and senior officers should get the dose to boost the morale of the general public.

During the launch of the drive at the Civil Hospital, Medical Education and Research Minister Om Parkash Soni, along with Deputy Commissioner Gurpreet Singh Kharia and Commissioner of Police Dr Sukhchain Singh Gill, was present.

Speaking on the occasion, Soni said the vaccine was completely safe. Replying to a query regarding the demand of the health employees that the elected representatives and senior bureaucrats should get the injection before others to instill confidence in people, he said, “As per the protocols, in the first phase, the vaccine will be administered to only health workers. In the next phase, police personnel and other frontline warriors would get the vaccine.” He added that sooner or later everybody would get the injection.

Civil Surgeon Dr Charanjit Singh said those who were administered the dose of the vaccine today would get the second dose after a gap of 28 days. He said the Health Department had received around 20,000 doses which were sufficient for the health workers in the district.

District Immunisation Officer Dr Sukhpal Singh said those who were administered the dose were kept under observation at the observation centre set up for the purpose. He said none of the beneficiaries complained of facing any trouble after getting the injection. He said the vaccination drive would pick up the pace in the coming days as per the guidelines of the Health Department.

India chased down the target with one ball to spare, riding ...