Acting tough on those who deface Amritsar 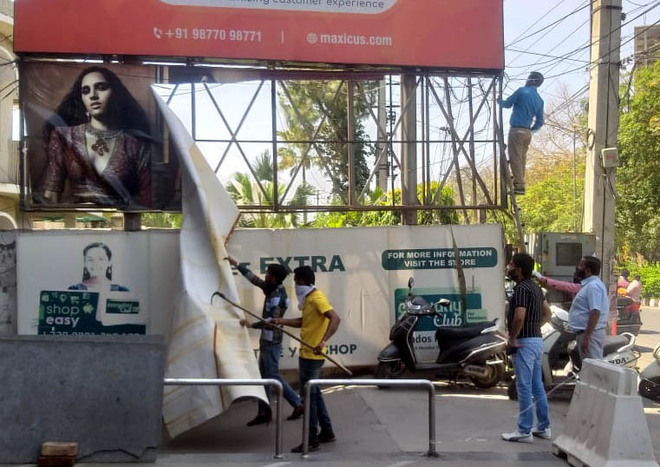 Workers of the advertisement wing remove flex boards in Amritsar.

The advertisement wing of the Amritsar Municipal Corporation (MC) has become quite active right from the beginning of the new fiscal.

Reason: Shortfall in revenue generation during previous financial year. The MC has been facing criticism over the defacement of the holy city from residents.

MC Commissioner Komal Mittal appointed Sushant Bhatia as the in-charge of the advertisement wing who came with an agenda to enhance revenue and come down hard upon those who deface the city.

Last year, the MC had a target of Rs12 crore for the advertisement wing, but only Rs1.45 crore could be collected.

Focusing on the third party advertisement, the advertisement wing has issued notices to mobile and telecommunication firms, IELTS centres, travel agents, beverage companies and shopping malls to provide details of their advertisements displayed in the city.

Bhatia said all these entities have to pay tax for displaying billboards in the city. Otherwise, there’s a provision to register an FIR under the Public Property Act, he said.

“There was no penalty for defacement in the city. We are making efforts to fix the accountability (painters, printers along with owners) for defacing the city. We will also implement rules for display boards outside shops. Similar rule of 3-ft width will be implemented for third party advertisement,” he said.