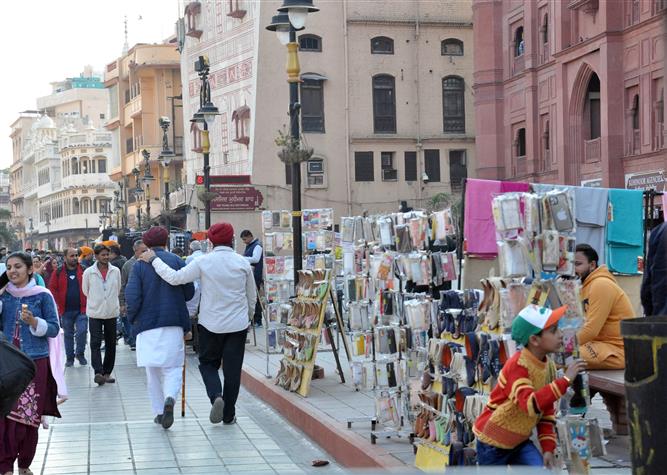 Illegal encroachments on the Heritage Street in Amritsar. file

Local activists have alleged that the political patronage behind illegal encroachments on Heritage Street is defacing the image of the holy city. Interestingly, shopkeepers, who have encroached upon the street, had distributed ‘Laddoos’ to celebrate the transfer of Municipal Corporation Commissioner Kumar Saurabh Raj recently.

The economy of Amritsar mainly depends on tourism, but local political leaders and officials have turned a blind eye towards providing security and facilities to the tourists visiting the holy city. -- Charanjit Singh Gumtala, member, Amritsar Vikas Manch

“Political patronage has become evident from the thanks given by the encroachers to MLA Dr Ajay Gupta and distribution of sweets after the transfer of the MC Commissioner, who had constituted a team of the MCA employees for not allowing any encroachments on the Heritage Street. The law-abiding citizens of the holy city along with the tourists and pilgrims are annoyed over the political shield provided to the encroachers,” said Manmohan Singh Brar.

“At present, scores of vends have covered major portion of the Heritage Street leading to Golden Temple causing unnecessary inconvenience to the tourists and pilgrims. The Golden Temple Post Office area and Maharaja Ranjit Singh statue area almost have become the e-rickshas and auto-rickshas stand throwing away the status of no-vehicle zone to the area. The police and officials of the MC have failed in removing the encroachments. The encroachers defy their requests as they enjoy the support of the political bosses,” said Principal Kulwant Singh Ankhi.

“The economy of Amritsar mainly depends on tourism, but the local political leaders and administrative officers have turned a blind eye towards providing security and facilities to the tourists visiting the holy city, even the SGPC and other Sikh organisations have brought in the notice of the government many times regarding this issue, but to no avail,” Charanjit Singh Gumtala of AVM.

“People had hoped that the AAP government would ensure the implementation of law and order in every sphere of life, but are disappointed to date. Amritsar Vikas Manch strongly demands from the local bodies minister to make the street encroachments-free to facilitate the tourists and pilgrims visiting Harmandir Sahib,” president Hardip Singh Chahal.