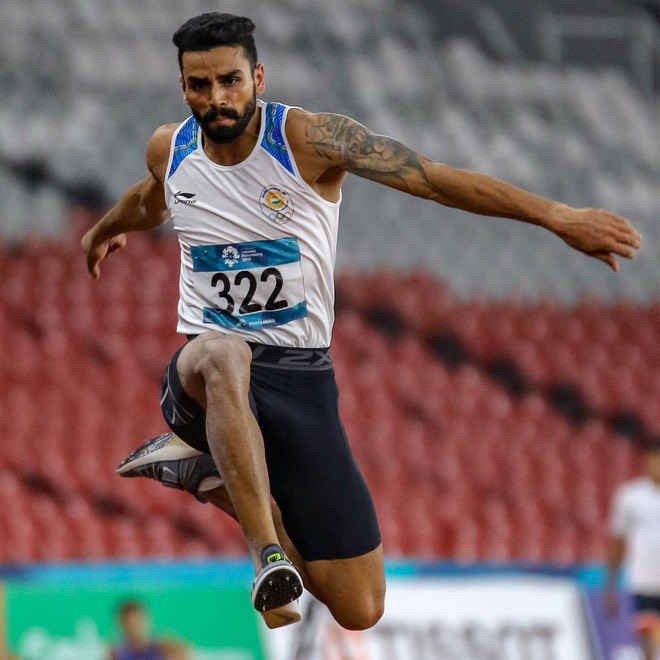 Hailing from Amritsar’s Harsha Chhina village, Arpinder Singh had earned a spot in the scheme, after he clinched gold in the 2018 Asian Games held in Indonesia. He has a personal best of 17.7m — a national record way back in 2014. Tribune photo

Part of the Target Olympic Podium (TOPS) Scheme for two years, triple jumper Arpinder Singh was handed a shocker late November after Sports Ministry decided to drop him from the scheme. He is still finding it hard to come to terms with the decision

“I was surprised because how a performance review could have been done amid the pandemic,” he was quoted as saying, after likes of Neeraj Chopra, Tejinder Pal Singh Toor and Hima Das were retained after a “performance review”.

Hailing from Amritsar’s Harsha Chhina village he had earned a spot in the scheme after he clinched a gold in the 2018 Asian Games held in Indonesia. He has questioned the selection criteria for the scheme and says the ministry could have at least waited for two more months as the Federation Cup for athletics is likely to be held in February.

“I received a call that I was being left out of the TOPS for non-performance. How performance could have been drawn when hardly any event took place this year due to the pandemic,” he questions. The sole event he participated earlier this year, before the virus gobbled up the athletics calendar, was in South Africa wherein he managed a distance of 15.97m.

He has a personal best of 17.7m — a national record way back in 2014. Employed with the ONGC, he is currently practicing at Sports College, Jalandhar. Before the lockdown, he was practicing in Trivandrum in Kerala. As soon as the curbs were enforced, he returned to his village in Amritsar. For first three months he remained there and focused on maintaining individual fitness. In July, he moved to Sports College where he is still camping.

“The decision is utterly demoralising,” Arpinder laments. However, he will not plead for re-inclusion and says he rather prove his point through performing when the next season kicks off. “I don’t want any confrontation; neither will I approach the Sports Ministry nor the AFI (athletics federation). I will prove my case with my performance next season. Hopefully, it starts in three months,” the 27-year-old states.

Being the first Indian to have won the gold medal in the World Continental Cup in 2018, his grouse is that without holding any event during the past nearly 10 months the Sports Ministry arrived at the decision.

He added that this decision of dropping from the TOPS was demoralising for sincere athletes who daily perspire in the field. Son of a retired Army man he refuses to pursue the matter in writing with the Sports Ministry.

Hailing from Harsha Chinna village, he dabbled into triple jump as his father Jagbir Singh, a Kabaddi player in the Army, motivated him towards sports. He found his predilection in the track and field events and soon he was sure to carve out his career in triple jump.

Soon, he scaled the ladder up with his gritty and consistent performance. His first noticeable performance was his clinching of the bronze medal in the Asian games way back in 2013 at Pune.

A year later he had repeated his performance by bagging bronze in the Commonwealth Games held at Glasgow. He had clinched the gold medal in the Asian Indoor Games held in Turkmenistan in 2017.