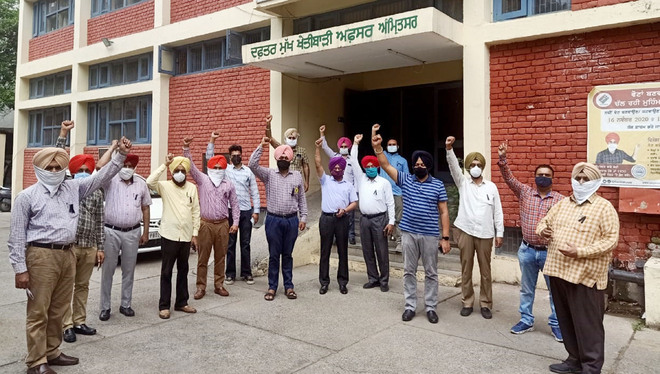 Staff of the Agriculture Department stage a protest in Amritsar.

On the call of the Agriculture Technocrats Action Committee, agricultural technocrats staged a protest by wearing black badges here today.

Led by committee General Secretary Sukhbir Singh Sandhu, they announced to wear black badges at work till their demands are met. An announcement of a complete pen- down strike on May 20 and 21 was also made.

“In the absence of regular departmental promotions for long, there is a wave of resentment among agriculture officers as there are a large number of vacancies at various levels in the Agriculture and Farmers’ Welfare Department. These vacant posts in the department are affecting agricultural extension services to the farmers,” said Sandhu.

“As many as 141 Agriculture Development Officers (ADOs), who were selected after rigorous examination, are awaiting their appointment letters even after completion of their recruitment process. We demand immediate appointment of these officers and they should be paid according to the salary scale mentioned in the advertisement,” added Sandhu.