Ahead of I-Day, cops step up vigil, hold flag marches in Amritsar : The Tribune India 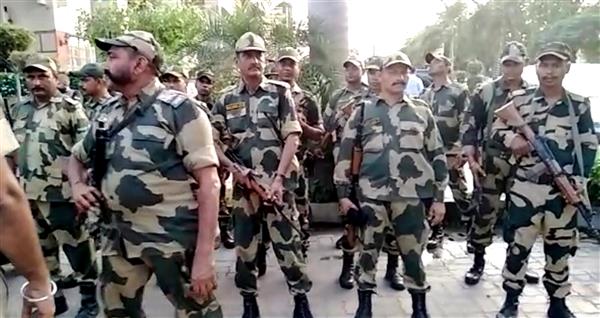 Police and paramilitary forces take out a flag march in Amritsar on Wednesday. Tribune photo

Ahead of the Independence Day celebrations, foolproof security arrangements have been made in the city to maintain law and order, instill a sense of security among the public and keep a check on the anti-social elements, claim Commissioner of Police here Arun Pal Singh.

Flag marches are being conducted in different parts of the city with teams of police led by Parminder Singh Bhandal, Deputy Commissioner of Police (law and order), ADCP City-1, ADCP City-2 and ADCP City-3. Besides police personal, jawans of the BSF and SWAT also participated in flag marches.

Vehicles and suspicious persons are being checked by the police at special nakas set up on inner and outer roads of the city. Police parties are also conducting patrolling in the city.

Due to the festival of Raksha Bandhan, special foot patrols have been organised, besides checking of malls and bazaars by sniffer dogs and anti-sabotage teams. The police teams also questioned the persons staying in hotels and inns and paying guest accommodations.

“The general public is requested to cooperate with the police if they see any suspicious object or suspicious person and immediately report it to the police so that any untoward incident can be prevented as soon as possible. The name and address of the informant will be kept strictly confidential,” said Bhandal.