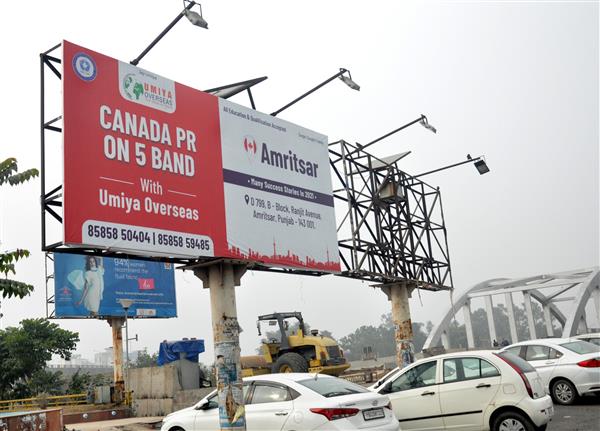 An RTI activist has demanded the cancellation of the contract of the Amritsar Municipal Corporation with a private firm for allegedly favouring the latter in the bidding process of advertisement sites.

Suresh Sharma, an RTI activist, alleged that the MC witnessed a loss of Rs 25.53 crore by awarding a contract of advertisements sites.

Sharma claimed that the contract of these companies ended on November 30, 2021 and as per the written agreements the firms have to hand over the unipoles and gantries to the MC, but the the firms didn’t hand them over.

“The firms didn’t clear the dues, but the same persons got the new contract by changing the name of the company. The MC allotted the contract to the new firm for Rs 12 crore on December 1, 2021. The contract has been allotted by violating the terms of bidding. The bank guarantee has been reduced from Rs 6 crore to Rs 3 crore. The firm did not provide any experience of work to civic body. Moreover, the same sites were allotted for Rs 22 crore in 2019, but it has been now allotted for 12 crores,” said Sharma.

The RTI activist has written to Secretary Local Bodies Department and DGP Vigilance.

The official concerned of the MC said, “The amount of the previous firm is pending and the matter is sub judice. The allotment rate has been reduced by the Finance and Contract Committee (F&CC) as no firm was showing interest. The technical evaluation committee has decided about the experience and bank guarantee of the firm.”