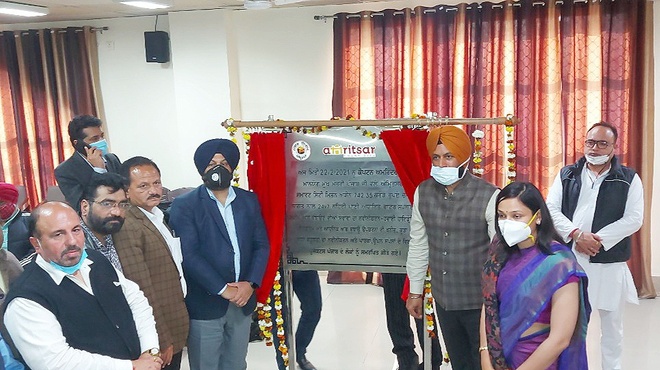 Mayor Karamjit Singh Rintu along with Deputy Commissioner Gurpreet Khaira and MC Commissioner Komal Mittal during the inauguration of first phase of the project in Amritsar on Monday. Tribune photo

Seven months after the cabinet’s nod to canal-based water supply for Amritsar and Ludhiana cities, Punjab Chief Minister Capt Amarinder Singh on Monday virtually inaugurated the first phase of the project worth Rs722 crore through video-conferencing.

The entire project would cost around Rs2,200 crore and would help in providing clean and safe drinking water to the population of the holy city, while it would reduce dependence on underground water which has been leading to the environmental degradation in the state.

The International Bank for Reconstruction and Development, the lending arm of the World Bank Group, would finance 70 per cent of the cost and the rest would be borne by the Punjab government.

In order to strengthen urban and water supply service management and improving water supply infrastructure, the state government had urged the World Bank for support in implementing the round the clock canal-based water supply project in the city in June 2018. A pre-feasibility report was prepared by the World Bank in 2015 which was updated in 2019. It emphasised on the need to shift from rapidly depleting and contaminated decentralised groundwater supply source to a centralised and treated surface water source.

The 40 acre land for the construction of water treatment plants, along with treated water collection tanks and pumping stations close to the canals, was acquired along the Upper Bari Doab Canal at Vallah village at a cost of Rs36.40 crore.

Besides, the CM also inaugurated several other projects including upgradation of fire brigade and procuring machinery for solid waste management and beautification of parks in the city.

Speaking on the occasion, Mayor Karamjit Singh Rintu said many developmental works are under Smart City and AMRUT (Atal Mission for Rejuvenation and Urban Transformation) project. He added the civic authorities were also constructing a smart road on the outside periphery of the city worth Rs118 crore. “Around 66,000 LED streetlights were already installed on city road while a multi-sports stadium is also being constructed at Gol Bagh here.”