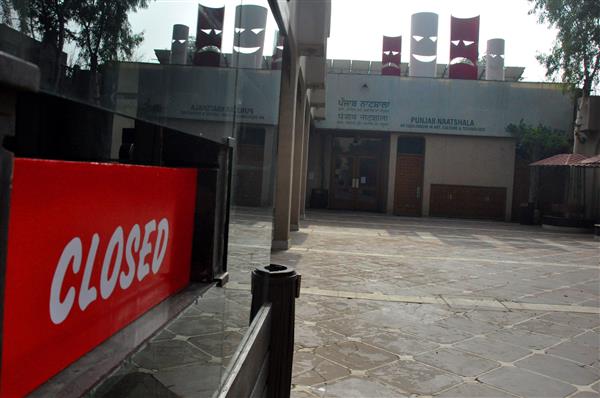 The pandemic has brought out the acute vulnerability of the art and culture sector as all prominent cultural spaces remain shut - Photo: Sunil Kumar

The art and culture space has faced extreme challenges and economic losses during the first and second waves of the pandemic, as most live performances and creative discourse remained suspended.

The sector continues to count its losses as fresh restrictions due to the third wave of Covid-19 has once again halted live performances and art events, keeping the audience away.

The pandemic has brought out the acute vulnerability of the art and culture sector as all prominent cultural spaces remain shut.

“The faint ray of hope for the revival of theatre and cultural activities that came with complete resumption of activities last year has dwindled. Prominent theatre spaces, with auditoriums that used to host live performances are now facing depleted financial reserves, as zero activity means no source of revenue,” said Kewal Dhaliwal, noted theatre person and president of Virsa Vihar society.

The overhead expenses of running a space like Virsa Vihar that has a hi-tech auditorium and three exhibit-cum-workshop halls, on an average, comes between Rs70,000 and Rs75,000.

“It includes electricity bills, salaries of staff, which is at bare minimum currently and the cost of maintaining sets and equipment. We had almost no income during 2020-21 period, we have been bearing the cost of overhead expenses as well as any live events being organised through donations collected by Virsa Vihar Society members, which include prominent writers and artistes. Apart from that, no financial support has been provided by the government or cultural agencies,” he said. The primary source of revenue for Virsa Vihar is the rent-income generated through the auditorium. The venue used to host year-round events, including concerts, theatre festivals and literary seminars.

“We have cancelled five bookings that were scheduled for the month of January and now, no further bookings for performances are being done until further notice,” he said.

Similarly, Punjab Natshala, another important centre of cultural discourse in the city, too, has been struggling financially to support the livelihood of several theatre artistes associated with it.

Jatinder Brar, founder of Natshala (in pic left) and a noted playwright, said Natshala’s two home productions, made at high cost, were scheduled to be staged over a period of six months. “Saka Jallianwala Bagh, one of our most expensive and highly acclaimed play had completed 102 shows, when the lockdown was announced. We had planned to stage 200 shows, but could not. Post lockdown, in December last year, we staged another home production ‘Sabz Bagh’, with 33 artistes, to a rousing reception. We planned to host more shows, but now it seems unlikely as with the third wave going on, there will be no audience,” he said.

According to Brar a quality theatre production demands an expense of Rs4 lakh to Rs5 lakh. “Earlier, a good run of plays at multiple platforms used to cover the cost of production and even bring in revenue. With such high cost, recovery is almost impossible under restrictions such as having 50 per cent audience capacity. This directly impacts the livelihood of artistes involved in production and also the functioning of theatre spaces,” he said.

Brar said the audience in the city used to pay up to Rs100 entry fee per play, but currently, even free-runs of theatre productions are difficult to host. Natshala boasts of a technically advanced stage being the only place in the city with an auditorium for people with special needs.