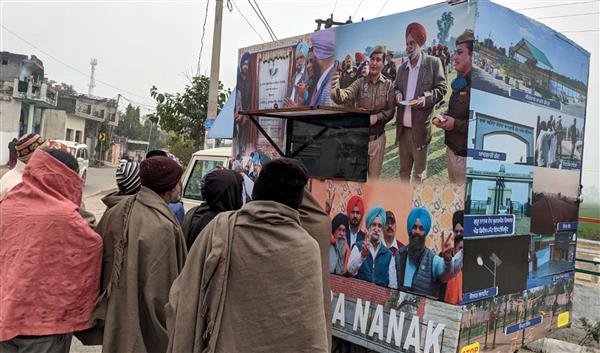 Digital reach Residents of a border village watch political documentry of the Congress at a village falling in the Fatehgarh Churian constituency on Friday. Tribune photo: Vishal Kumar

Though the political rallies and public meetings are restricted due to the outbreak of the third wave of Covid-19, the political parties are adopting alternative modes for the election campaigns.

The Congress party in the Majha belt has hired publicity vans, equipped with LEDs, to propagate its policies.

Goods vehicles have been modified to install the LEDs to play political videos. Such vans are being deployed in rural constituencies such as Fatehgarh Churain.

Generally, it is stationed in a village for two to four hours and plays documentary movies on the development work conducted during the Congress regime, the attitude of BJP and SAD during the farm agitation and poll manifesto. Rural people are showing interest in the movies being displayed on the LEDs.

“After the Covid-19 restriction, the candidates and political leaders are not able to conduct public meetings. These vans are good to share their message. Villagers have been showing interest in these videos as it provides interesting political insights,” said Raju, a resident of Kala Afgana.

As the political parties are well aware that a large section of rural society does not have smartphones and without political rallies and public meetings, those voters, especially from economically weaker section, cannot be approached. These publicity vans are stationed in the localities of the weaker sections so that they also get information about the ongoing political discourse.

“Well-off sections of society read newspapers, watch TV channels and are active on social media platforms. Most of the time they don’t attend any political rally or meeting to support any leader of the party. But people from economically weaker section don’t have time and privilege to get these modes so the political party contact them physically.

The LED-equipped vans may help political parties to express their views in front of voters,” said Navdeep Singh, a political activist.