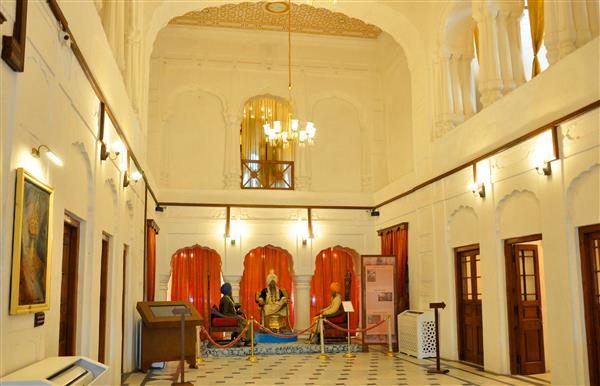 An inside view of Maharaja Ranjit Singh Summer Palace, which has been opened for public. Photo: Sunil Kumar

The Summer Palace of legendary Sikh ruler Maharaja Ranjit Singh, situated in the historic Rambagh, popularly known as Company Bagh, has finally opened for public after 14 years of conservation work.

The building is currently under the possession of the Punjab Heritage and Tourism Department. A museum has come up, where artifacts and weapons, including swords, katars and rifles of the Maharaja Ranjit Singh era has been displayed for public.

The multimedia touch panels in Punjabi, Hindi and English languages have also been installed inside each gallery, from where visitors can get information about the artifacts kept in the respective galleries.

At the entrance, visitors can see the mannequins of Maharaja Ranjit Singh sitting on his throne (replica of original throne) and his coterie. The original artistically-carved roofs have also been fixed, which further adds to the attraction.

Rambagh was declared a “protected monument” in 2004. However, even after the notification, it was never fully handed over to the ASI. The ASI has the possession of the garden and carries out conservation work at the entrance, four watch towers, hamamghar, Chhoti Baradari and machhighar.

The main Summer Palace building, where the Maharaja used to stay, was in the custody of the Punjab Heritage and Tourism Board that carried out its preservation work. Before the conservation, which started in 2007, there was a museum in the building. During the conservation work, the heritage artifacts belonging to the Maharaja Ranjit Singh era were shifted to Maharaja Ranjit Singh Panorama and brought back to the museum.

“The department has put up a ticket for entering the museum — Rs10 for adults and Rs4 for children,” said an official. He said a few people are currently visiting the museum due to lack of publicity.